A day with lots of driving (four hours from Cookstown to Waterford, then another two thanks to construction to get to Cork), but one of the most special readings. 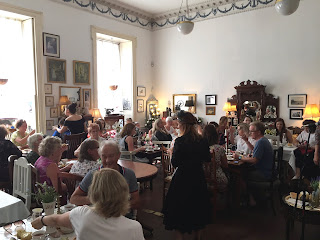 That's the crowd, and the location, and the black-clad back of site host Sarah Jane Hanton, for this day's matinee reading presented by the Arts Office, Waterford City & County Council and Modwords. That last organization is particularly important as it's run by dynamo Anna Jordan, who we all sort of wanted to smuggle back to Santa Barbara so she could bring her uplift and energy to our arts programming. Waterford and Modwords are very lucky to have her. She's emceeing the event here. 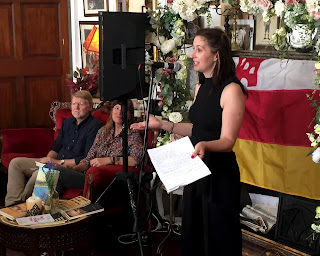 The reading took place at The Parlour Vintage Tea Rooms, a lovingly restored building that had been Waterford's customs house. Now it's sort of an all-purpose spot (go look at the website's video) that often hosts artsy things like poetry readings with tea and scones. How come Santa Barbara can't have a spot like this?If only there was some vacant real estate somewhere.... 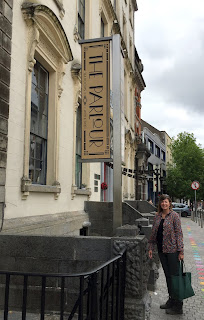 The laureates read 15 minutes or so each to a rapt audience despite the heat wave that had the Waterfordians (?) distressed and damp; old buildings aren't big on air conditioning. But everyone stuck around for Q&A, too, often asking for tools and tricks of the trade. Think of it this way--if in LA everyone thinks he or she is an actor, just not yet discovered, I'm pretty sure everyone in Ireland thinks themselves a writer. And to be a writer, you really only have to discover your pen. 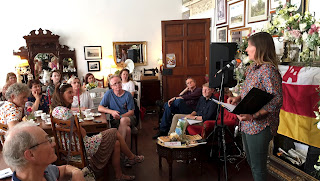 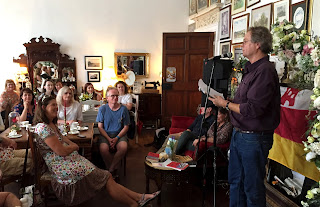 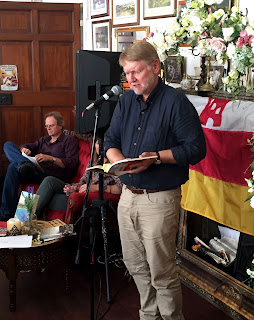 I also have to admit there was the possibility at this point in the trip--especially in the center of a reading each day in a different town for three straight days--that our group might have been getting a bit punchy. For one reader, I won't say who, slipped and said, "While we've been here in Scotland...." at one point. That certainly got everyone's tad of a titter attention.

While the other two couples stayed in Waterford for the night, Chryss and I moved on to our next destination, Cork, because we just couldn't spend enough time in the car. Seriously, we liked the idea of getting to spend two nights in some places, and so we made it to our 4th floor walk up right on the  River Lee. Of course the Lee splits and makes the center of town an island--great for driving fun ("Hey, we're going over a bridge again!"), but our apartment was on Father Matthew Quay across from the South Channel of the Lee. And the setting sun looked a bit like this: 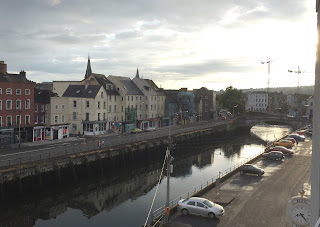 Plus the central circular stairs with our big suitcases meant we didn't need any gym time. Bonus! The place itself was cute, itself two floors, the bedrooms on the first, the bathroom, sitting room and kitchen on the second. Very roomy. Plus a great Air BnB host--she even had electrical converters for you to use. The location couldn't have been better for exploring Cork, either.

Breakfast was a typical (based on the three we ended up having) Irish hotel breakfast buffet at the Glenavon, with more sausage and rashers than anyone should even consider consuming before noon easily available.

Lunch, though, was at the Parlour Rooms, and Sarah Jane Hanton and team can throw a spread. Here's the whole thing, after we'd all picked it over: 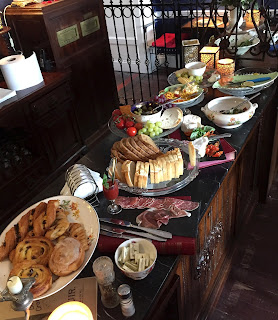 And here's just my plate of it: 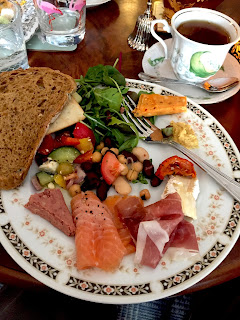 Also in process, because it was just too tempting to stop and take photos. Have I extolled the smoked fish of all sorts that was everywhere on this lucky island? And the bread, so much good bread. It's a good thing we walked a lot. Then there was also the great conversation with Sarah and Anna, the kind of women who get you excited and energized about what art and those who care for it can accomplish. Such a thrilling shot of optimism (not that we ever need that here with 45* about).

As for dinner in Cork, it was complicated. We went looking for what was supposed to be a great pub, Clancy's, but it had been closed for some time. (One of the few fails from our DK tourbook.) So then we aimlessly wandered the numerous Cork streets, many of which look more like alleys, to the point were we sometimes weren't sure we'd walked down one already. Where to go, where to go. It was a Sunday night, which also caused issues. Turns out some of the Irish are religious. Who knew.

Finally we gave in and ended up back at Sago, the Asian restaurant around the corner from our apartment and the spot where our host left the keys for our pick-up. It wasn't anything fancy but certainly cranked out some tasty food, truly crispy veggie egg rolls and then two items with prawns as they had no items vegetarian (still sort of puzzling--usually that's not an issue at Asian food). Even odder, neither of the items we ordered appear to be on the online menu. Oh well. We were hungry and getting travel cranky, so the black bean sauce prawns and Chinese noodle prawns made us happy. Not sure why I didn't get any photos.

Tea at the Parlour. Had to have some on the trip, even though I'm much more a coffee drinker. But when tea comes with its little pot and proper china, it just seems better thanks to the ceremony of it, no?

Prior to that we also had a "let's go to a bar to use their bathroom, better order something" drink at the Granville Hotel in Waterford. There we got to see the thrill that is people waiting to get into a Carvery they think is a deal--the Granville is a hot spot. As it turns out it's hard to remember much about the beer--our receipt says Dungarvan, which is brewed in Waterford and I think we had the Cooper Coast Irish Red, and also says a Heineken, and that just confuses me (they do own both Beamish and Murphy's so maybe that was it?)--but what really confused us was the drunkish older guy trying to talk us up from two seats down the bar. For most of our trip the Irish accent wasn't a problem, but this guy's was the most impenetrable. You'd think he'd gargled the Blarney Stone with Guinness each morning. For his voice was also very low and very rough. So to be polite I tried to do the smile and nod thing, but then he would say, as clearly as he said anything, "You know what I mean?" and give a gruff little laugh like there was no right answer to his vexing question. And he was right. As much as we could make it out he had a theory of how the consumption of stout had to be balanced by drinking whiskey, too. An alcoholic's anatomical algebra, you might say. Or you might say, ggrrrr nkkklt ssrts. 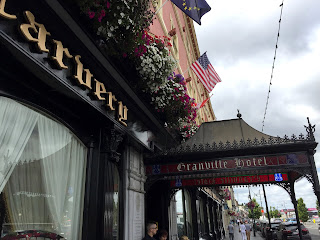 At dinner at Sago I couldn't resist a Tiger as it was a mere €3.50, so value. Then we went back out and wandered the streets into a pub, finally, across from another pub with some crazy loud live music, and tried some local Cork beer from Rising Sons Brewery. Solid, but more a reminder that craft brewery doesn't not automatically mean brilliant beer.

Lots of highway driving, which makes you realize highways can be the same everywhere. (Although we must point out the roads are well-kept in Ireland. Probably because they don't spend all their money on the military or something like that.)

Again, just hanging out in the former Waterford Customs House was cool, especially the spot with this stairwell and rotunda. 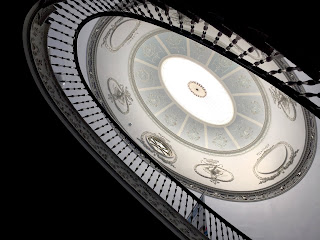 And Cork was fascinating. It's Ireland's second most populous city, and our guess was 96% of the men we passed were on a rugby squad. We didn't see any fights, but that was probably just because the land of powerful, small-necked men guaranteed mutual assured destruction if people started whomping on each other.

Luckily there were plenty of churches to kept the holy peace. This one isn't even a cathedral, which says something. It was also right next to us, so a great landmark to find our way home. And to think some people think religion has no place in today's world. 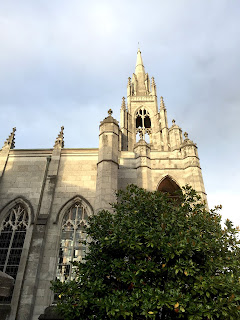