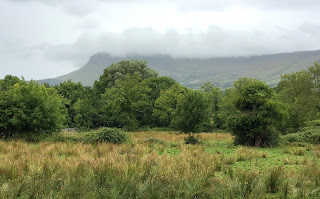 I had to open this day with that photo so I could then insist the rest of the post lies under bare Ben Bulben's head. For today's post is haunted by the ghost of W.B.
Read

The last stop on the whirlwind tour, but what could be better than to cap things off with a reading in William Butler Yeats' favorite Irish town? The PLs were reading as part of the seventh annual Tread Softly Festival in Sligo, so got in a fancy program and everything again. One thing Ireland arts groups have down is rounding up a host of artistic events into one mega-festival. We need to do that here in Santa Barbara. 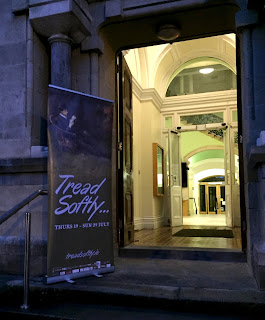 As the PL reading was a bit of a late add to the schedule, it became a late evening event on the schedule, too--the event began at 10 pm. Of course in Ireland it's still light then on a summer's eve, but we're all slowly becoming Benjamin Franklin folks (early to bed, early to rise, especially when one of our stars was not healthy [you not it's not healthy to assume poets are wealthy]).

And in a funny twist, the location was switched last second--one of the organizers might have pushed the key right through the keyhole at the original location, might I say, so suddenly we were in a wonderful room in Sligo City Hall. Which has inspiring words painted on all its walls. And is where Yeats lay in state before he got buried out at Drumcliff. 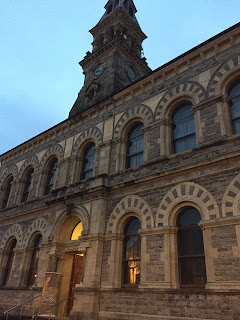 The poets went back to their connect-the-poems round robin ways, which, of course, works even better when you worry an audience member could drift off due to a late start. But all went very well, even the couple of times I stepped in for Chryss's round when she was worried her poem might sound like, "hack hack blasting GGG it hack RRRR apart." 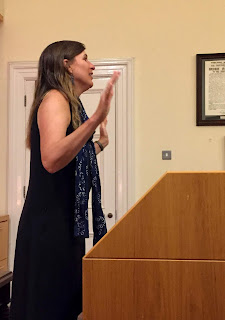 It wasn't me!, Chryss says. 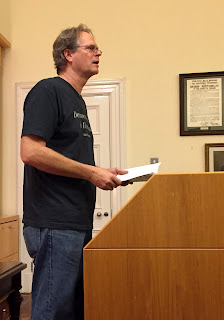 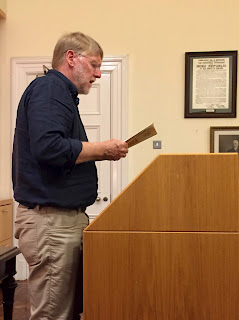 Of all things the crowd even attracted a woman who had lived in Santa Barbara but moved to Sligo over two decades ago. At least she was able to vouch for us as representatives from California.

Another one of the advantages to a reading by a sponsored party--they land you hotel rooms. For our single Sligo night we got put up at the Sligo Park Hotel & Leisure Club. We weren't there long enough to take advantage of the leisure, but it certainly was nice enough even if our room was right across from the stairway from the lobby, so we got a bit of guest chatter. (And not even anything salacious and fun.) We did get to hang at the bar a bit, but you'll read about that in poured.

It's a long drive from Dingle to Sligo, as you have to get off the peninsula to start, and then tunnel under Limerick (we both took time to compose dirty ones we won't share), then keep driving north. We even skipped the spot where supposedly Mary made an appearance to villagers in 1879, mostly because it's named Knock, and I just wanted to do knock-knock jokes. ("Who's there?" "Mary!" "Mary who?" "The mother of God...Jesus!" And that last part has to be said in a voice that's as exasperated--yet holy--as you can.)

We got into that let's not stop, let's just get there, damn we're hungry, we don't have to stop death spiral, but our bladders won out. So we stopped at one of the tarted up rest stops they have, petrol station-store-deli-ma-jigs that are about as depressing as similar stops we have in the U.S. See, we are all one (sad) peoples. Unless you get a bag of these: 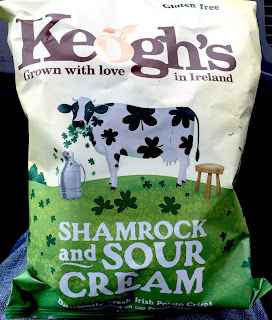 According the contents, there really are shamrocks in there. Turns out they taste like chicken parsley.

We did make up for that with an incredible dinner, starting with its inviting jewelbox exterior. 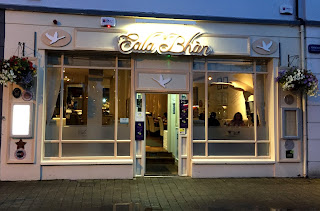 Eala Bhan (which means white swan) is rightfully lauded as one of the places to eat in Sligo, and how could a bunch of poets and spouses not want to go to the kind of place that has Yeats' quotes adorn its walls? 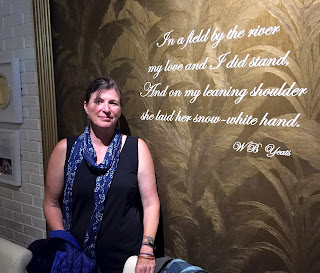 But on to the food, which kicked off with an amuse of seemingly simple yet serious deep consomme, potato and leek and perfect on a drizzly evening. 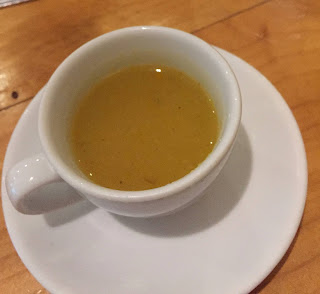 And of course there was bread, brown, but not just with the usual beautiful butter but a pesto of sorts, too. 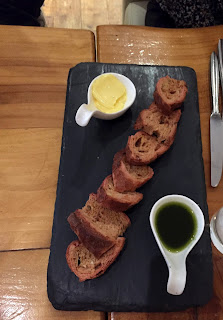 And then my delightful appetizer, a trio of duck with the most luscious scoop of ice cream made with Cashel blue cheese (savory ice cream is the future!). 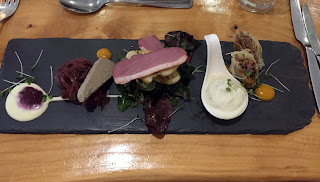 Reading from left to right that's a duck liver pate, carpaccio of smoked duck breast, and mini duck spring roll. Lots of flavors and textures, of course, the pate pungent and creamy, the carpaccio almost a duck pastrami, and the spring roll nodding to Asia, but then if you used the Cashel blue ice cream as its dipping sauce, veering back to Ireland fast. With the accoutrements of sauce dollops and salad and red onion marmalade, this could have been my dinner and I would have been happy.

But, of course, I opted for happier, and went for the catch of the day. 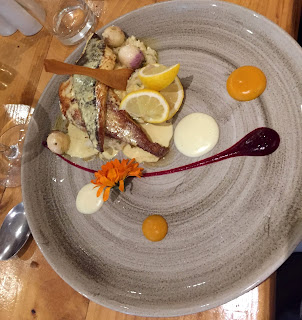 Had to have one last shot at hake, didn't I? (A bad not-quite-poem: Hake, hake, I love how you flake,/ Delicious, nutritious white fish!") Those are baby turnips along with a couple teensy potatoes and different sauces so each bite was a unique burst of flavor. Plus an edible flower garnish.

Chryss had the vegetarian lasagna no one had to suffer for, as it's mushroom, spinach, and blue cheese with expertly made pasta between (and not the most photogenic dish, alas). 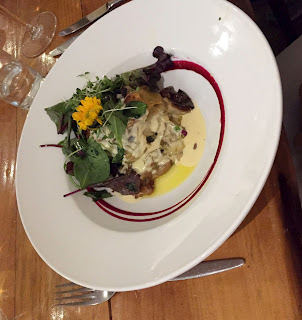 All in all a rich incredible meal and a fine last supper for all 6 of us on the trip as we would all go our separate couple ways the next morning. It's been weird not having everyone to eat with since.

So we got to do some afternoon drinking after all that driving from Dingle to Sligo. Fortunately the hotel bar was a fine place to hole up as the drizzle-to-rain-to-drizzle came down, and they even offered several local brews we had not run into yet. A particular favorite was this one 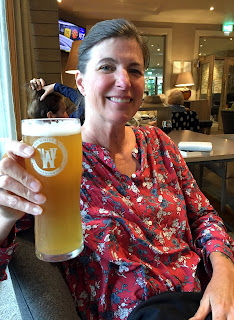 because, as I must emphasize as Chryss put it, "Here's your tall White Hag." The beer itself is called Little Fawn, and it's yet another session IPA, as if they might be afraid to make a full one. Or know CA has that down, so why bother? Not quite as good as the one at Dick Mack's, but tasty enough. We'd revisit it at Eala Bhan, too. (And then I had a glass of Neftali Sauvignon Blanc with my fish, too--good match from Argentina for the sauces.) 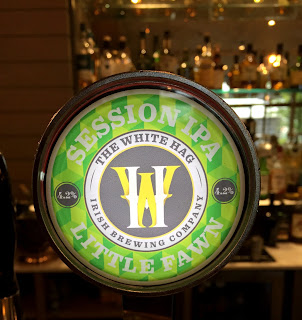 And while the British Empire did plenty of nasty damage--hey, that's what empire is all about, no?--one good thing it left behind are the lights on taps at a bar. Aren't they an attractive beacon to your beer? Got them in Australia, too. For my first then I enjoyed a Lough Gill Lost Armada APA, which as a fitting name as it doesn't exist on this Sligo-based brewery's website. 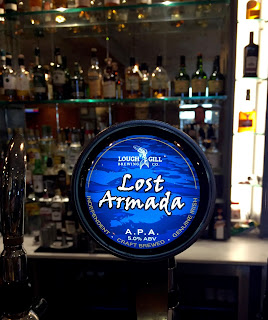 Once again, pleasing, direct, low in alcohol, easy to drink, easy to not think about too much. I guess in a land where there's so much rain and you can garden a lot, it's good to have a surplus of beers to consume while doing yardwork. Then for a second I tried another Lough Gill, and this one even makes their website, an Anderson's Irish Ale. Figured given Chryss's family name is Anderson, we couldn't go wrong. Malty with just enough hop kick, this one clocks in at 4%. You are truly meant ot drink all day in Ireland. 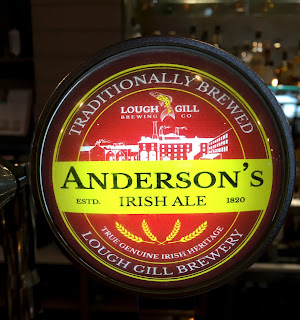 After our reading we went with our new-old Santa Barbara friend to The Harp Tavern, near to City Hall, for a nightcap. The pub was jumping, with live music in the back and us sneaking our way to share a snug with some others in the front. More White Hag was to be had. And soon the lights came up, as bars close early there. But we can say we drank until the end of the night, which is only fitting, as we barely fit.

David and I were the only two up enough late afternoon for an excursion through the mist to Drumcliff, just  north of town, for Yeats' grave. Given the poet left his own epitaph, you sort of have to go. And somber and grave (oops) it is. 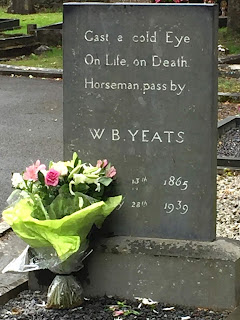 We weren't on horse, so we didn't pass by; even worse, we had to wait a few moments as a bus tour pulled up for their photo op/respects. The church itself has that "here's where charming meets spooky" vibe down, which kind of happens when something is Gothic but not outsized. It seems so aspirational. 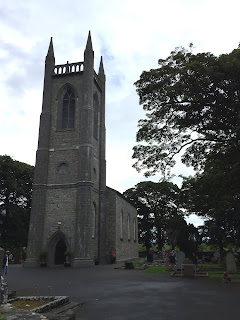 It's surprising on the inside, that's for sure, eschewing Christ on the cross for this terrific mural that lights up when set off by the wood and stone. 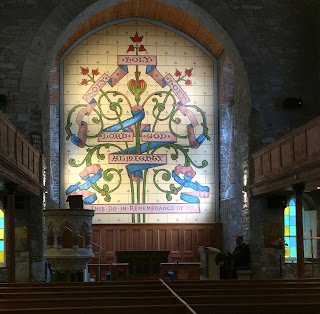 And I have to leave the post with this shot of dusk as it settled upon the Garavogue River that helps make Sligo wistful and romantic, especially after a day of light showers giving everything a wash, a sheen, especially when the iPhone camera wishes it were an Impressionist painter. 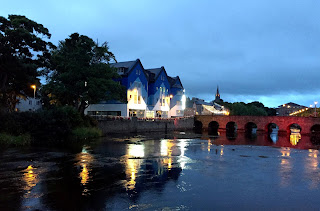