The Evening SB Dining Got Goin 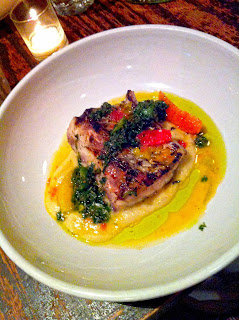 It hurts even more now, that Suzanne Goin and Caroline Styne’s restaurant project rumored to be coming to Montecito isn’t. That’s because Goin and Styne brought their acclaimed Los Angeles hotspot a.o.c. to Santa Barbara for an evening on December 2 and that dinner was a total delight. Of her many going concerns now, from Lucques to the Tavern to the Larder, a.o.c. is where she helped birth the small plates revolution. I like to think of Goin as an ascetic sensualist with enough talent to make that seeming contradiction not just work, but illuminate, refreshing a diner’s jaded mind and palate. There’s never an ingredient wasted on a plate, but what is there adds up to a whole beyond her always market-driven ingredients.