A Plate with a View

I've discovered there actually is a way that New Jersey is similar to Santa Barbara. Both suffer from being so close to a true power player--New York City in NJ's case, LA in SB's--so it's easy to remain the provincial cousin, the country mouse, the place with too many Italian restaurants and not enough creativity. If you've got a bit of chefly gumption in Jersey or Santa Barbara, you just move to where the real action is.

So it's great to run into some truly fine dining in NJ, as we did on a recent trip back east. What's even more surprising is the spot was the Highlawn Pavilion, nestled atop a ridge of the Watchung Mountains in the Eagle Rock Reservation about 15 miles out of Manhattan; it's the last tallest thing around. So, yes, the views are stunning (even if it's surprising how much a November day can smog up in NY--or maybe they were just trying to make us Californians feel at home). Somehow Highlawn Pavilion beats that old saw "the better the view the more meh the food."

We opted to do it for lunch as it costs a bit less--you do pay for that fine food and view--plus there's that trade-off: the glamor of glittery skyline at night or the day's cool clear views. We did keep largely focused on our plates, though, all put together with an artisan's skill of pretty precision. For example, here's the tuna tartare we shared: 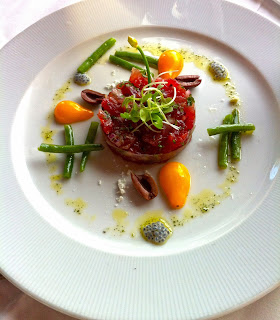 On the menu it's listed simply as Yellowfin Tuna Tartare, Extra Virgin Olive Oil, Fleur de Sel, but as you can see Chef Mitchell Altholz does a bit more, pushing it towards salad Nicoise with the perfect haricots vert, a few olive halves, the bus-colored pear tomatoes (that equally popped with sweet-acidity), There's also the finest slice of cucumber helping the fish hold its shape, both functional and delicious and something you'd never bother to do at home.

I'm going to skip the entrees, although they were delicious too--a mushroom risotto, a perfectly turned piece of Arctic char. Because I want to write about the dessert we didn't want but had to have. It's this: 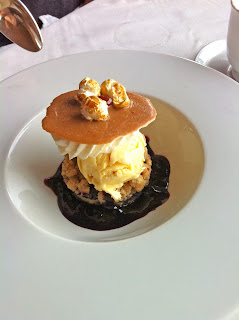 Which is New Jersey Blueberry Crunch: Crunchy Blueberry Cake, Popcorn Ice Cream, Fresh Blueberry Sauce, and Hazelnut Tuile. That I had never had let alone heard of popcorn ice cream is a tragedy--of course something that's salty and buttery makes for perfect creaming. Then that cake, almost more fruit than dough, but it held together and had just enough crisp to it to make it crunch. Oh, and the ice cream was perfectly smooth, so having that tuile, aka gussied-up brittle, atop, with those three perfectly popped kernels attached....a kind of simple, thought-through brilliance, both fancy and not at all all at once. Now that's fine dining.
Posted by George at 8:00 AM