A Toast to André Cold Duck, and That First Sip of Wine 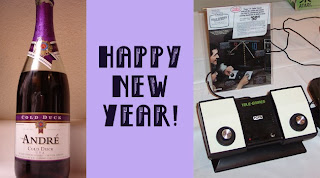 This is about the first New Year's Eve I remember as NEW YEAR'S EVE, and no doubt this was a late revelation, say when I was 12 or 13, but I'm just that way -- slow to what matters most. For this is a memory of first buzzes, and in a lifetime of them, that means something. What's lovely (and yes, there was childhood lovely, not that it ever felt that way while actually being a child, of course) is so much of childhood gets wrapped up in this neat little bow that lets loose an arrow that pierces the Sears catalog, André Cold Duck, and Pong, not to mention my neighborhood friend Dennis Puglia, as it was at his house this happened. It was his parents' largesse that plopped the world's first home video game and two glasses of infernal bubbly in our barely teen laps, as if barely teen laps didn't have enough to deal with, suddenly recognizing what they were for and having no way to do anything about it.

Want to read the rest then do so at the KCET blog.