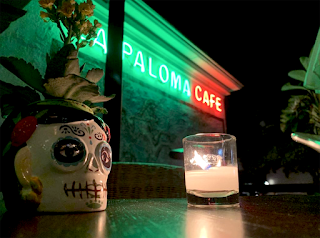 In some ways who better than La Paloma Cafe & Restaurant to hold a Dia de los Muertos celebration given the spot is a resurrection of a previous restaurant (the 1940-1983, pre-Paradise Cafe, La Paloma). Given November 1st is considered the day the veil between the living and the dead is most diaphanous, sure, let's break out the sugar skulls, paint our faces, set up an altar to those we care to honor, and, of course, do some serious eating and drinking.

While I'm pretty sure spirits don't gain weight, it's pretty definite we did that evening, feasting to the memories of those we loved and lost. Things kicked off with the cutest of mini-cocktails, a Calaverita in a skull shot glass, but its size belied its kick, what with both tequila, mezcal, a hibiscus-cinnamon-ginger piloncillo syrup, and lime and ginger beer. Adorned with flowers and a tajin rim, the only thing wrong with it was you wanted to imbibe much more.

I'm going to avoid a complete rundown of each dish, but La Paloma seems to have completely found its stride at this point, even on a special evening with lots of customers (particularly for a Tuesday). Indeed, some friends got seated outside on the uncovered back patio, and when a shower let lose (see, spirits had to be involved to cause rain in Santa Barbara), they were quickly ushered inside and received a gratis dessert to comfort their slightly wet selves. Just one way the service was shining along with the food.

I'd be remiss not to mention the music, by a combo whose name I missed (sorry). But they kept things buoyant and bubbly with classics ranging from "Besame Mucho" to "La Bamba," adding to the festive feel. 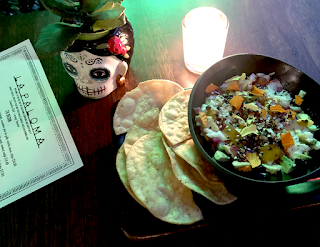 Still, it was the food that made the evening truly special. An appetizer crudo sang of the sea; the crispy Brussels sprouts brought smoke from the red oak grill and earthy funk from a syrah-porcini mushroom reduction. And to single out one main, the evening featured a special Chili Colorado, beef tender and braised with such depth of flavor in a sauce no doubt made with numerous kinds of chiles offering their orchestra of heat notes. Wow. Wrapped in tensile homemade tortillas, the dish was a kind of simple heaven.

Matched by a dessert, a Mexican salted chocolate tart that's as good a chocolate dessert as I've had. Too often such plates get either too much or boring five-forkfuls in, but this had such a perfect balance of sweet, heat, cocoa, caramel, and salt you keep going back for more. It could tempt the dead.