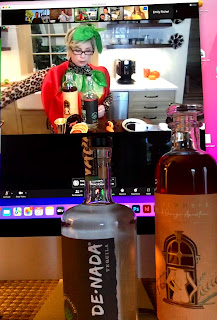 It's not every day I've been convinced to add maple syrup to what's billed a margarita, but not only do you only live once, you might only once partake in the AR Social Club's Halloween spectacular that truly helped put the spirits into the spooky season. But, being a boring straight white guy, I'd never taken part in a kiki before, let alone one Zoomed into my house from hipster Brooklyn. By now my guess is you're confused, so let's take s step back to set the scene via informative Q&A.
Q: What's an AR Social Club?
A: Let's hope you've got those last two words--I can't explain everything to you. But the AR stands for AskRonna, an advice podcast hosted by Ronna Glickman (@ronnaglickman) & Bryan Safi (@bryansafi). Not only are they IG account-forward, they are more or less characters created for humorous now consumption--Glickman is a long time persona for Jessica Chaffin, while Safi went by Homosensual on his podcast Attitudes! It's all very fabulous and very New Yawk.
You actually get a monthly box of booze and other goodies (for Halloween those included plastic fangs with stage blood, two full-sized Snickers, and two full bottles of liquor...more on those in a bit). Reminded me of the moment when Major Kong in Dr. Strangelove opened the survival kit and concluded, "A fella could have a pretty good weekend in Vegas with all that stuff."
Q: Do these subtly famous funny folks know about booze?
A: They don't have to! That's because Conor McKee from Fiasco! Wine & Spirits puts together the packages that feature artisan liquor and then comes up with each episode's cocktail. He really knows what he's doing, and the other people in the shop even get you the Zoom link if somehow you never got yours. So, A+ for Fiasco!
Q: You get full 750ml bottles? And the stuff is good?
A: Hey, that's two questions in one ask. Yep, two full bottles. (And before you ask, a single kiki+box is $125, but it's $100 if you sign up for at least three.) I can only vouch for this box, but the two products were tasty and unusual. DE-NADA provided a bottle of their tequila blanco that's additive free and bright and clean as a mercury beam. The blood orange aperitif came from Elsewhere--that's actually it's name--created by bespoke R&D Matchbook Distilling out on the non-snooty end of Long Island. Made with NY organic corn, CA organic blood oranges--8000 pounds of them, cut by hand, a party everyone wants to be invited to next time--and then enough roots/botanical to practically make this an amaro: quassia, pink peppercorns, cloud forest cardamom, gentian, Indian cinnamon bark & wild cherry bark. It's a bit too much of a kick as a sipper, but it gives a cocktail that good deep depth, if you know what I mean.
Q: You actually got info during this event?
A: Yes, if highly interrupted and played for corny comedy gold. For instance, when Paul Monahan from Matchbook was talking about the north fork of Long Island where they're located and said it had less fancy developers than the folks in the Hamptons, Ronna cut in, "Those developers were called Pilgrims, dear." And, of course, the two college buddies who developed DE-NADA got lots of gruff for going to Tulane, not that they didn't run with it. One of them joked he majored in Liver Destruction. But, yes, people from both liquors were on the Zoom.
Q: Was it worth an hour?
A: If you like madcap and manic, sure. It's clear there's an in-group learning curve trying to suss out the loving/sparring duality that is the Ronna and Bryan relationship, and then other Zoom-ers are allowed to pop in like the cherished annoying neighbor on a sitcom, along as they are also a somebody--this episode that was comedian Naomi Ekperigin. Otherwise we were advised to keep our mics off, which really just makes sense or a Zoom with five screens of participants can become chaos. not that people didn't fire off their opinions in the chat that never let up.
Q: Is that a butt on the blood orange aperitif label?
A: Why, yes. There might have been a crack or two about that.
Q: Are you sorry?
A: Do you know me by now? Never apologize for puns or scoring two full bottles of good booze. 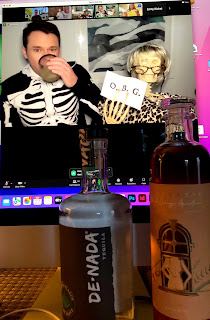