A Review of "Orwell's Roses" 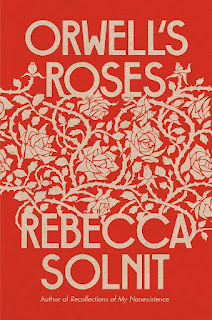 Think of Rebecca Solnit’s Orwell’s Roses as a whydunit. Beyond admitting how much he influenced her as a writer/journalist/activist, Solnit was also moved to learn of the rose bushes Orwell planted by his countryside English cottage in Wallington. Planting fruit trees made a certain practical sense, but roses fed no one.

That would be the too facile conclusion one might have before reading Solnit’s lovely, hopeful book. Despite relatively harrowing, clear-eyed passages about our current climate crisis and about the vicious Stalin-led starving of Ukraine in the 1930s, Solnit also succeeds at what she claims Orwell accomplishes. Both calm yet crusading writers help us witness “imperfect and unidealized beauty.” That is, see the world we live in.

Care to read the rest then do so at the California Review of Books.