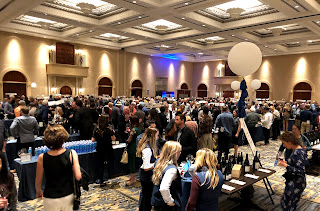 There's just so much to take in over two days of Grand Tastings (and one 20th anniversary soiree dinner) at World of Pinot Noir that it suddenly hit me--there's no better way to respond than with a notes column like those wonders Larry King used to do for USA Today, delicious fervid fever dreams of name dropping, non sequiturs, anomalies, anachronisms, and the occasional rightness of a stopped clock. That sounds like right up my tin pan alley (see, I already did one!). So I figured I might want to try to channel the master of the hit and ellipsis run.

Not every second day of an event begins with a guy in line proudly complaining he's got pinot thumb and pinot finger; listen Bud, just don't have them pour on your hand...No one understands value anymore--what is up with people bidding more on a silent auction item than its worth?...Have you drunk too much or just enough when someone says "angular fruit" and you say yes? (thanks FEL)...Why do winemakers say, "We make a ____ we want to drink?"...I wrote a sentence I want an ellipsis after...Is Jenny Williamson Dore one of the nicest people in the business? Even I'd be less a curmudgeon if I poured the delicious Foxen line--their 2015 La Encantada is the pinot smell of the Sta. Rita Hills...Missing old friends like Balletto, Longoria, Dolin, Failla...Happy to catch up with old friend Matt Dees at The Hilt table...Too easy to get to; guess hipsters only know him from Jonata... 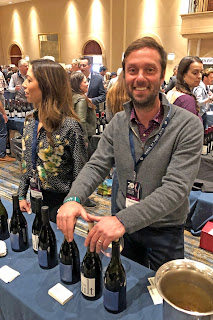 His photo (not the one of him above, obviously) of a Mickey Rooney-sized cluster of pinot from Radian in his palm got us reminiscing about Andre the Giant...That Radian, by the way, a five course meal in a 750 ml bottle all by itself...Had a lovely catch-up with Greg Brewer about a fancy dinner none of you got to attend while I sipped one of the last four bottles of 2006 Brewer-Clifton Cargassachi Vineyard he had stashed--it aged better than Angie Dickinson...Struck me funny the Domaine Chanson guy says "They require age, a lot of age," when France is the country that inspired the film Gigi--rrr, that Leslie Caron...Speaking of French, definitely knew what they meant when pouring the Liquid Farm 2017 Radian Vineyard and said, "That's the coup de grace right there."...If you're like me you might think pennyroyal is a Bond girl, but it's actually related to mint and if you grow your grapes near it, yep, minty...thanks for that hot tip, Anderson Valley's Goldeneye...The Peake Ranch rascals snuck in their 2017 Bellis Noir, no doubt not a shout out to the Mekons Rico Bell/Eric Bellis but a pleaser of a syrah/grenache blend...Are the Mekons the least likely band you expected to see in a wine story?...Bitter? Accurate? Both? (Walter Winchell could do it.) The pourer at Louis Latour asserted, "The New World is, 'I'm going to give you everything right now.'"...Maybe not any air travel from Uncle Sam for a month...People line up for Kosta Browne pinot like they were getting the latest LP from the Chairman of the Board for free with it, but for my ducats I'd down their 2015 "One Sixteen" chardonnay instead...Man does not live by red alone (sorry Bernie, Uncle Joe's got you)...Ever since that UTI it's been Ocean Spray in the morning for this scribe, but in the evening, I'd sure go for a 2014 Sea Smoke Sea Spray...I still don't get why the French "own" Champagne--have they tasted tasted this stuff?...With this COVID-19, it might be an era for as little skin contact as possible, so the Maggy Hawk 2018 Edmeades white pinot noir might be a hit! very fresh...Remember to hang with friends for soirees--so hard to meet people when a roving sax man plays over the DJs deep tracks...Why can paella never have both the mussels and the clams done equally well?...One is always a bit over done, like a Larry King parody turning into an Andy Rooney riff...Ice, ice, baby...