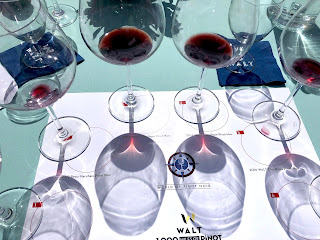 Let's face it, not every winery's proprietor has been the US Ambassador to Austria. But if you took part in one of the World of Pinot Noir's kick off events for its 2020 fete, you would have had the chance to hear and meet Kathryn Walt Hall, who is the head of WALT Wines. The event, which is a mouthful (in both title and what you got if you had attended): "WALT Wines Presents Mile Marker 60: Clos Pepe Estate Vineyard Experience."

WALT took on a 15 year lease with Clos Pepe in 2015, committing to one of the more beloved properties in the Sta. Rita Hills. For instance, just its pond is this photogenic: 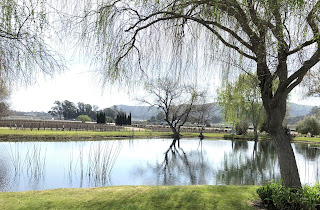 After a walk through the vineyard, just at the nascence of bud break (here's hoping all the rain forecast for the rest of March doesn't bring too much cold weather too), we settled in for a vertical tasting of this site with 30 acres of vines, almost all pinot noir (a darn good thing for a WOPN event). Think mostly Pommard clones as the base of most of the wines, with some 667, 777, and 115 for those more floral lifting notes, too.

The panel for the tasting featured Hall herself, WALT winemaker Megan Gunderson, Adam Lee from Siduri, who had made wines from the site for decades (and is a witty chatter, so who doesn't want him on their panel?), and Stephen Pepe himself. I won't bore with you all the details, not that the details are boring, but they go down a lot better if you're drinking the wines as you hear them. Suffice to say, Lee pointed out that with the slopes of the site and the ways some spots get more of the famed transverse valley winds from the Pacific a mere nine miles west, he didn't realize the diversity of the property at first in such a small area. He added, "And diversity means complexity--it's truly truly remarkable."

The lineup of wines proved him correct, even if the surprisingly warm early spring day and its sun perhaps warmed our samples a bit beyond the best pinot tasting temperature. The vertical included a block 6 barrel sample from 2019, so far from a finished wine, if certainly robust, and fermented in concrete!--sub-theme for the day, pinot-exploration! And then took us to the 2013, 2014, 2016 and 2017, the current on-the-market vintage. No 2015, as that was a big frost year. The older wines were aging well, showing off the acidity typical of the region that keeps them lean mean red berry machines. The newer wines are that and even more FRUIT; as my Indy colleague in his Wine Enthusiast hat Matt Kettmann put it about the 2017, which he gave 94 points, "Powerful aromas of black cherry, tobacco, clove, chocolate and oak are heavy but pleasing on this bold style of pinot noir. The lush, delicious and potent palate delivers more of the same, with black-cherry and tobacco flavors sprinkled with crushed nutmeg and vanilla."

The one fascinating wild card was the first public tasting of Adam Lee's new project with Chateauneuf-du-Pape star Philippe Cambie, a 2019 Beau Marchais pinot from, of course, Clos Pepe Vineyard. Since it was Cambie's first pinot, he had no sense of the "right" way to do things and the wine, at least so far (it just went into barrel in November), seems to be a powerhouse. While, as I said earlier, the region's wines tend to age well thanks to their acidity, this pinot actually has tannins that should hold it up. But we are talking pinot that was on its skins for a long 48 days. Fascinating.

Then there was a feast grilled up by Frank Ostini and the Hitching Post II gang, and what could be wrong with that, especially with lots of the 2017 WALT to drink with it? Tri-tip over red oak with salsa and beans. And lots of other yummy things. We were very lucky. There was even a mini-concert by Anderson Daniels to end the event, a performer who channels Tennessee even if he's from Minnesota. Accents, sometimes they're hard to figure. Hard to deny a song called "Warm Up with a Cold One" at a drinking event, though. 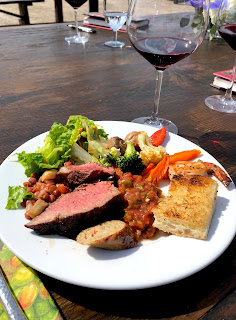