The Night LA Invaded the Lark 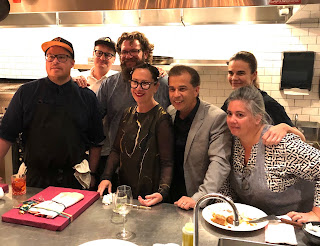 I chose to start with the finish by posting that image up top, as what you see is as fine a gathering of culinary talent in one photo as you might ever be able to see. What's better, they teamed up to make the meal 30 or 40 of us had the intense pleasure to enjoy last evening for the Founders Circle Dinner (and assorted way-too-lucky media and sponsor hangers-on like me) for the upcoming Santa Barbara Culinary Experience, March 13-15. How fitting it happened on Leap Day, as it wasn't a celebration that could happen on any ordinary, repeatable calendar.

Chairman of the Santa Barbara-based Julia Child Foundation for Gastronomy and the Culinary Arts Eric Spivey made clear how much this was an evening of thanks, especially to the eight families who attended and the eight who could not who were founding supporters of the event as it kicks off its first year. "Our north star has been to shine a light on culinary Santa Barbara," he made clear, "and to create fun education events that Julia herself would have wanted to attend." Ultimately his goal is, "We want people to have FOMO that they weren't here with us if they don't attend this year."

The FOMO will be strong if the SBCE weekend can even be a soupçon as wonderful as the dinner hosted at The Lark. It kicked off with passed apps, you know, simple things like a Santa Barbara uni tartelette with steamed egg and wasabi or an absinthe cured hamachi atop an everything lavash cracker along with kumquat confit, black sesame mascarpone and bronze fennel. But all that was truly a warm up, and I don't necessarily want to list every last element of the dinner, let alone all the wines as I just don't want to be that cruel to those of you who couldn't go (including my wife--sorry, honey!).

That said, this morning I spent some time in my Suzanne Goin cookbooks to find what she did to the Santa Barbara Pistachio Company nuts in her citrus salad. I'd never heard of an aillade before, and while it's more traditionally a garlic-walnut sauce, Goin makes hers lighter with pistachios and brighter with some citrus zest and juice, and then the nuts are extra flavorful while giving of themselves 110%, as it were. 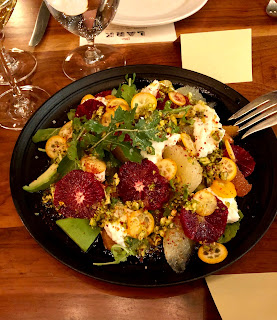 All of that bounty except for the stracciatella (burrata's creamy heart ripped from its flesh for your delight)--hails from Peter Schaner's farm in north San Diego County--Goin called him her favorite farmer. And I assume you all know Goin, the chef at Lucques and AOC and Tavern, and whose Sunday Suppers at Lucques cookbook is one of our favorites when we want to impress. 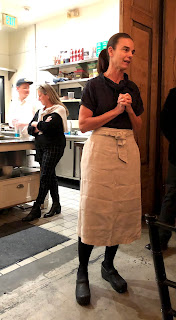 The chefs were all asked to relate a Julia Child tale, and Goin's was charming. Her mom, she said, came from a overcook the pot roast family while her dad's had more refined tastes. For one of their early dates her mom made her dad a Spam loaf. "On the next date, my dad gave my mom a copy of Mastering the Art of French Cooking," she said. "She cooked out of it for my whole childhood, so in some ways I was raised by Julia."

Michael Cimarusti, the mind behind LA's Providence and Connie and Ted's, recalled having the opportunity as a very young chef to cook a special full foie gras presentation for Child at Le Cirque in New York City. A similar full bore without going over the top method made his dish of Santa Barbara black cod insanely flavorful--20% of the sauce was black truffle. That musky earthiness did wonders with the salt of the fish, and the dish had a kick of spring green from its peas, and then just enough texture and hint of acid from some radishes, too. A simply brilliant if far from simple plate. 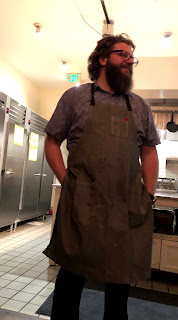 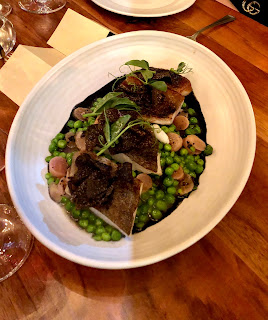 Executive chef at The Lark Jason Paluska made it very clear he belonged with the illustrious chefs from the south with eight hour smoked wagyu beef ribs with Texas BBQ gastrique--I have to assume there's some coffee in there, the flavor was so dark and deep. Add to that spring garlic cornbread and sweet and spicy pickles to zippily cleanse your palate for the next rich bite. It was a cunning dish. 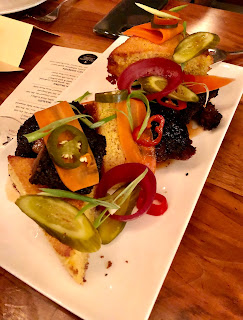 Paluska called it a little taste of Houston, Texas, and complimented Acme Hospitality Managing Partner Sherry Villanueva for all her support, claiming, "I didn't know I was a Texan cooking in California until I met her." All of us rib enjoyers say thanks, Sherry! 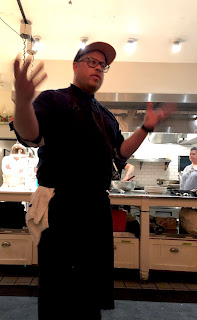 You know it's an epic night when the dessert course is made by Nancy Silverton, who won the James Beard Foundation's Outstanding Chef Award in 2014. Any foodie worth his salts (you have to have at least 7 salts in your pantry to be a true foodie, so this isn't just a figure of speech) knows Silverton from her Netflix Chef's Table, or from founding LaBrea Breads, or from Mozzaplex. 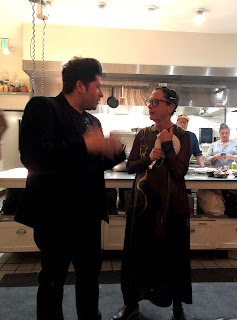 There she is with event MC Billy Harris, telling her story, serving Julia Child a variation of the brioche tart we were all about to eat at a 1997 taping of Child's television show Baking with Julia. Child insisted on the cooking and filming being done in real-time as much as possible, so when Silverton composed the dessert hot from the oven with gooey, off-the-stove stone fruit atop, she worried she had burned poor Child's mouth, especially when she began to tear up. Instead Child said, "That's a dessert to cry over." 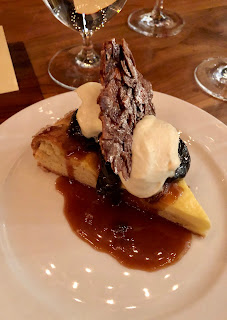 To be honest, it didn't make me cry, well, not until it was all gone and I had no more. Subbing for the stone fruit thanks to seasonality we got caramel prunes (even more classically French, when you think about it), with zabaglione and spiced nuts that have ruined me for anything even mildly brittle-esque ever again. The dessert could sing, and it wasn't not too overly sweet a tune, either. What a capper.

And I didn't even mention the 11 wines that were poured. This Santa Barbara Culinary Experience thing is going to rock.