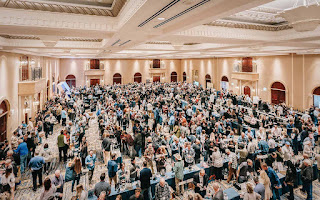 Somehow this is my 32nd blog post about the annual spectacular the World of Pinot Noir, which kicks off its 20th anniversary edition tomorrow with a few special events, one of which I'll be writing about tomorrow night after I attend it (think barbecue and pinot and the SYV). Recently I talked to one winemaker who in one way reasonably pooh-poohed the whole shebang, at least the Grand Tastings, by saying, "Everybody makes good wine now. It all tastes more the same than it doesn't."

So let's think about how to celebrate, and if anything deserves celebration it's pinot noir (well, there's one more reason). It's easy to focus just on Friday's and Saturday's Grand Tastings at the Ritz-Carlton Bacara, as they are billed quite appropriately--100 producers on Friday, 120 on Saturday, most with more than one wine, some with things not even pinot (roses! whites! hard cider!!). I've discussed in previous years the best ways to approach a room that might as well have signs warning "Beware! FOMO Ahead!" at all the entrances. Since you can't do it all, drink water, eat some of the food, chat with pourers--many of whom are the winemakers themselves--make a plan for how to get something coherent out of it (chose a region or style ["Do you have anything with stem-inclusion?"] or only drink one vintage). OR approach it in a magical way and let a dice throw or runes or the alphabet guide you.

My guess is any way will be an interesting informative way. Drink deep, enjoy, take some notes. If only to see later how your handwriting deteriorates during an afternoon of drinking.

But you could skip the Grand Tastings, even. (Horrors!) Instead only go to a seminar or two and sit down and learn something. Just on Friday you could attend "What's Altitude Got to Do with It?" or "Siduri: 25 Years of Cruising the Pacific Coastline." How does the elevation of a vineyard affect what winds up in the bottle? How much of Adam Lee's incredible knowledge garnered over decades of winemaking can he share in one sitting? You could learn these things. And some of that you'll do through your mouth as you will have a guided tasting. That's just two of Friday's events.

Or you could just eat and have some wine with that. Let's look at Saturday, this time (note, this is far from covering everything about to happen, as you don't have the time for that). One dinner celebrates Bollinger Champagne and Calvisius Caviar, so if you ever wondered what the whole bubbles and fancy fish eggs fuss was about, and have a spare $350 (that's part of the fuss, surely), this dinner is for you. Or you could attend the 20th Anniversary Soiree Dinner, that's described as "an evening of epicurean delights, wine and dancing as you mingle amongst the legends of Pinot Noir and meet the rising stars." Two words: paella station. And more wine than you can shake your empty mussel shells at.
Posted by George at 9:23 PM