Downey's to Dish No More 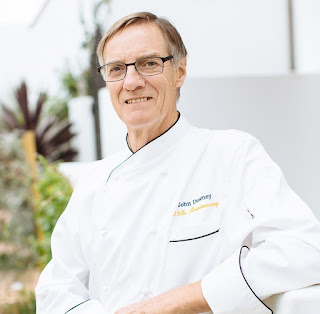 I had the great opportunity to sit down with John Downey a few weeks back and discuss, as he and Liz are shutting Downey's down after 35 years in a matter of weeks. (They're keeping the last night a bit of a secret to avoid a rush.) Alas, it was impossible to include everything we discussed in the Indy article I'm about to link to, but here's some of the extra info that I couldn't work in to that.

What's next?
"At 68 I find this really physically taxing. I know I look 40, say it," and he pauses for his very English joke to land, "but I beat the undertaker. I never wanted to be carried out from behind the line feet first."

Despite his jokes about mortality, one way he has stayed in shape over the years is hiking, including conquering Mt. Whitney. "I definitely have one Whitney left in me," he insists. "One of the retirement goals is to be in the eastern Sierras in the fall. For 35 years I haven't been able to be away from the restaurant that long, especially that time of year."

“When we knew we were going to close, we thought we’d just disappear into the sunset,” John Downey said about his recent announcement to retire. “Liz [his wife and stalwart in the front of the house] and I thought after a week people would say, ‘Downey’s, didn’t they used to be on State Street?’ Instead the outpouring of support has been overwhelming; we’re honestly touched by it. We take it as a validation of our work the last 35 years.”

If you want to read the rest, you know the drill, go to the Independent's site.

Email ThisBlogThis!Share to TwitterShare to FacebookShare to Pinterest
Labels: a start and a nudge, Downey's, Independent