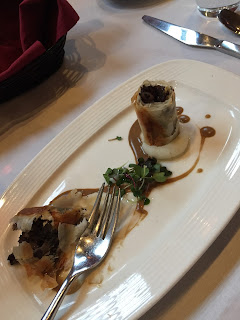 Sure, we all love the quiet, the chance to pass far from the crush, the hope there's some land and air that's ours, as much as moments are. Small towns. Hurrah! But if I told you I wanted to take you to dinner, you'd hope to hop into your hyperspace machine and head to the big city, figuring you need that cosmopolitan edge, that sense of happening, of buzz. Small towns we go to for a sense of zzz.

Unless, it seems, that small town is Plymouth, up in California's Gold Country. For we had the lucky chance to go to the very tasty Taste recently, where the food would make any city chef proud, the service was a proper mix of professional and pleasant that city waitstaff, busy for their break in whatever their real business is, sometimes can't be bothered to accomplish, and the setting was country chic without any need for quotation marks or excuses. Plus parking is easy and we were able to walk in at 7:30 pm on a Friday night without reservations!

Since it seemed every table around us was doing it, we opted to split a serving of the appetizer mushroom cigars (see the photo above), phyllo wrapping crimini, shiitake, oyster mushrooms, fresh herbs, with the cigar than perpendicularly posted onto your plate with a dab of mashed potato. Needless to say, there's a reason the photo is of my plate in the middle of getting devoured, as I forgot my journalistic duty just wanting to chow down. Earthy goodness.

Then, I ordered my main doing the opposite thing--checking out the sides of the dish and then letting the protein slab be a sort of surprise. Here's what caught my eye: Up Country Farms shishito peppers, grilled peaches, house made chorizo, cornbread crouton. Sounded like summer in a place that knew what summer is at its best. That yumminess sat around a Beeler Farms pork chop, cooked a bit more medium than I would have ordered, but I would have been wrong, in this case. So moist, with some good crispiness, too. And, they didn't do that death by piggie product thing that happens so often when you order chops--there was plenty to eat, but I didn't feel like I had bought my next two evening's dinners, too. 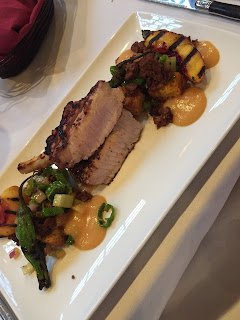 Chryss wound up with Ora King Salmon with roasted marble potato, haricot vert, butter toasted almonds, whole grain mustard beurre blanc that knew exactly where to draw the mustard line, a dish with classic roots and contemporary delivery. I say wound up, as she hoped to order the local trout special, but it got bought out between her order getting taken and the chance to fire it. The clever solution? Next to her salmon, Taste gave her all the sides that were to come with the trout, too, so she got the dish fishless. A clever consolation.

And while the mains were city-priced ($33 and $35 respectively), that is without having to add to the bill buying sides, at least. The wine list, leaning towards Amador County as it should (isn't it nice when restaurants support their local wine country? hint hint), was very fairly priced, though. I couldn't resist one of the by the glass offerings, a 2011 Scherrer Pinot Noir from the Platt Vineyard on the Sonoma Coast that was a mere $12. A bold beauty at low alcohol, it was a perfect match for both the mushrooms and the pork, but what would you expect from Fred Scherrer, who did time as Dehlinger's winemaker.