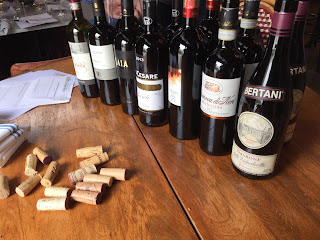 It might seem much to call oneself DoctorWine*, but that's what Daniele Cernilli does. It's not just because his autograph looks like an EKG printout. It is because he's written this two-pound tome of a soft cover book (I weighed it--that's what kitchen scales are for, right?), The Ultimate Guide to Italian Wine 2017, that's got more snapshot knowledge of one country's vinified output than it would seem possible to hold. We're talking facts and Facebook pages, ratings and reviews (that is quantitative and qualitative takes), head notes that establish context, cultivation, regional differences. It's a trip to Italy without an airline beating you up.

Even better, Cernilli brought a host of Italian winemakers to California last week, and in addition to visiting LA and SF, they came to little old SB too (it's good to have wine country). Les Marchands hosted a lunch for press to meet the Italians (it's good to be press). He began by saying, "My English is very far to be perfect," and I knew exactly what he meant.

His sense of what's delicious night be perfect, though, as we got to enjoy:

Not "mother-in-law" pinot grigio, if you know what I mean, this has some body and a bit of acid bite with lovely floral and pear notes. A fine pour alongside salad.

The good Doctor pointed out how this wine had "more acid, more elegance than other sangiovese" from Tuscany. It still seemed a bit tannic to me at just 4 years old, at lunch, paired with summer corn chowder with cherry tomatoes, bitsy fingerling potato, equally teensy lardon, and chipotle creme fraiche. As Cernilli pointed out, it's a classic with a "t-bone, rare of course."

This Sicilian wine, from near Siracuse where some refreshing winds blow out from the Greek isles, evidently, was one of my favorites (the Doctor gave it a 95). Rich, full, velvety tannins, plus what he aptly pointed out was a note of capers (think a bit vegetal but with a sense of place and purpose).

This dream Poliziano was no cheap trick...(sorry). Doc gives it a 97. Not just a berry burst delight, but named after a poet--Angelo Ambrogini, who went by the nickname Poliziano, a variation of his place of birth, Montepulciano. Ah, Italy--poetry and wine go hand-in-hand back to the Renaissance.

DoctorWine called it a "more rustic pinot noir, not in its DNA but in its taste and character," and that seemed fair. 100% Nebbiolo, it had a lovely floral quality for all its tannic structure (two years of barreling aging too).

To confuse things, if you don't know Italian viticulture well, while the town of Montepulciano mostly grows sangiovese, there's also a grape montepulciano, and that's the feature in the wine from the Marche. Turns out a poet made up the word roggio, too, to describe the brightness of the sun in vineyards. The sun does wonders for this wine--bright and complex, cherry and plum, with hints of tar and oregano.

This beauty comes from what is supposedly called the heart of Montepulciano and the only horizontal valley in the area. The result is a more international-style wine, what the Doctor calls "the most powerful sangiovese in Tuscany."

Nobody said this at the lunch, because, you know, lunch, but the infamous Hannibal Lecter line from the book is "I ate his liver with some fava beans and a nice amarone" but the producers changed the line thinking no one would know what an amarone was. (Lecter, a connoisseur, did.) North of Verona by Lake Garda, the producers take the grapes and let them dry naturally. They lose water and weight, and then go through a long fermentation, too, to get this warm and deep wine with some raisiny notes but also mint and cocoa. The Doc said, "It's particularly good with blue cheese."

All thanks to Allison Levine from Please the Palate for putting this Italian Invasion together.

*And, of course, being old and being a DJ, every time I see the name I hear this.
Posted by George at 6:00 PM