Friend and Dear Friend and a Restaurant's Encouragement 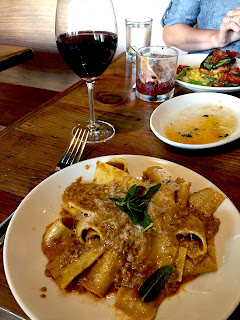 Given my love for Wallace Stevens' "The World as Meditation," how could I not be taken by Odys + Penelope? (And if that isn't the wonkiest beginning of any restaurant write-up, show me its competition.) We had the opportunity to hit the restaurant on the way back from San Diego a couple of weeks back just in time for DineLA. And while I always feel like taking advantage of such promos leaves a bit of a "R" for rube tattooed on your forehead, we'd been wanting to go to O+P since it opened, as we were fans of Hatfield's back in the day when fine dining was still a phrase you could utter and not watch your business model crumble. (Come remember with me now....) That super smart room, the full-view kitchen with so many chefs moving in such precision, the delicious-gorgeous food. We only had it once and missed it ever afterward.

So we looked forward to see what Quin and Karen Hatfield had in store for us at their latest spot. It's somewhat big yet still intimate, partially as the scent of smoke from the big grills in the kitchen hold you in its elemental arms. And right away what seems the least impressive wows you--we haven't had a salad we liked more in ages than their Sugar snap pea “Caesar” with creamy Parmesan slaw and roasted pepitas. Talk about reinventing a wheel that had gone a bit flat. The sliced up snap peas, so bright and crisp and just the right sweet, playing off the right-angled Caesar notes of garlic and anchovy, then the slaw a sort of salve, plus the necessary crunch from the pumpkin seeds. We shared one, wishing we had two. (Not that the grilled Argentinian white prawns with ginger chermoula disappointed, especially with their charcoal depth.)

Fighting FOMO, we went off the DineLA menu as we had to know what the bread-like goodness going out to so many tables was (we've also been to Sycamore Kitchen, and know Karen Hatfield bakes better than nearly anyone). Turns out they were cheese puffs--think gougeres with attitude as they're twice gougere size--and at least four times as yummy, somehow flaky, puffy, and cheesy all at once. What's more, they come with a smoked tomato romesco (that grill is hiding in so many dishes) that was so rich we didn't use the leftover white prawn butter we made them keep on the table for the cheese puffs.

Mains were both also crazy good. Chryss had early summer on a plate, oak grilled salmon, English pea and basil puree, cherry tomato salad, and grilled corn, each element of the dish perfection (it made you want a side of corn, for instance). Grill grill grill. I had the house made pappardelle, pork belly Bolognese, fried sage, supposedly the restaurant's most popular dish. I can see why: that sauce had what seemed like ages of flavor, if that makes sense, rooted in meat generally too good to be reduced like this, and that grill was in there somewhere doing its fiery magic. And someone can make pasta, too, that perfect tension that says fresh.

I could go on about the desserts, like a straightforward yet immaculately prepared chocolate budino with olive oil, sea salt, and a stunning take on the Oreo that should make Nabisco cry (or sue) and a coconut-cashew lime "pie," (it's kind of deconstructed, over the flakiest of tart shells) with local raspberries and toasted coconut ice cream that's all flavor in your face. Or the just inventive enough cocktails, or the helpful, timely, friendly, unobtrusive service. It's a place about comfort edging very close to something like fine dining, but then quick to say, "Servers wear jeans!" or "Smoke is like camping--how casual is that!" You're sure to say, "I need to go back."
Posted by George at 9:46 PM