When one has no real life, one lives by mirages. It's still better than nothing. 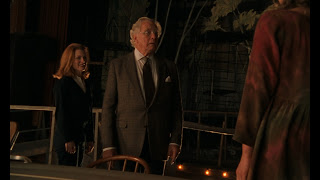 So George Gaynes has passed, and while everyone else remembers Punky Brewster and Police Academy films, I'm thinking of Chekhov. In particular, the aching elegy that is Louis Malle's Vanya on 42nd Street. For Gaynes' Serybryakov is perfectly powerful and wasted at once, the kind of time in its moment of turning that Chekhov polished for all its perfect pain. (Because, while watching, we recognize these characters cross the fulcrum into the last sadness of their lives, a moment we know we are rarely privileged to find in our own. Well, until it's too late.)

The film came out in 1994, my first year in Santa Barbara, and is still one of my defining "well, huh, that's Santa Barbara is it?" moments. I caught a screening at UCSB Arts & Lectures, even then emceed by Roman Baratiak (he's SB's Kevin Bacon everyone is six degrees from, isn't he?). Baratiak introduced Gaynes, long a Santa Barbaran, who told us a bit about the making of the film, no doubt, since it was an odd making--Andre Gregory and his troupe keep working at the play, irregularly, for years, often inviting small groups to watch. One of those visitors, Louis Malle, asked to film it.

But, that's not the real Santa Barbara moment. Instead, it was that our screening turned out to be on Andre Gregory's birthday. So Gaynes takes out his cell phone, dials Gregory, who, of course is out on the New York town, but when the voice mail kicks in, Gaynes leads us all in a rousing rendition of Happy Birthday.

I can't think of anything as richly insider and unimportant and ridiculously pleasing. Except maybe Santa Barbara at its often best.