Something to Fatten Your Tuesday 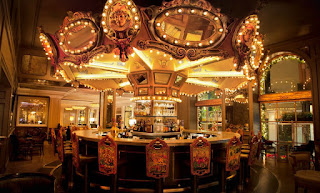 It's simple--New Orleans is the least American American city and that's why I love it so. Today's that thing called Mardi Gras, and if you toss me some cheap beads I'll show you a cocktail recipe. That kind of talk gets me thinking about previous potent potables I have poted (isn't that the verb form?), and leds me to the coolest bar of all-time. If you've been to New Orleans and drinks matter to you and you know Pat O'Brien's hurricanes are for people for whom 4 years of fratdom wasn't enough, then you go elsewhere, and first and foremost, you go for a merry-go-round ride. For in the Monteleone Hotel, you can sit at the Carousel Bar, where you end up spinning even before you've had a drink. It's at the Monteleone, where Faulkner, among others, used to sit deep in his cups, that you can get a Vieux Carré, which takes the basic Sazerac (not that a Sazerac is anything to sneeze at) and jiggers it up a notch. Turns out you can make a nifty variation at home, especially if you delve into Ted Haigh/Dr. Cocktail's indispensable Vintage Spirits & Forgotten Cocktails:

Shake over ice in cocktail shaker, pour into chilled up glass. Garnish with lemon twist.

Oh, and don't tell me you don't have the bitters, and no, you can't substitute and you can't leave them out. They do matter. You can buy a whole bunch at Still right downtown. Tell Jeremy George Eats sent you.
Posted by George at 8:00 AM