Born in Babylonia, Moved to Sonoma--Siduri 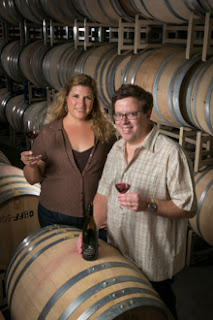 Adam Lee and his wife Dianna founded Siduri Wines (Siduri was the Babylonian goddess of wine) in 1994, and since then their winery has become one of the best known producers of Pinot Noir on the west coast, working with 20 fine vineyards from Santa Barbara to the Willamette Valley. Things got so good, they even got to sell the winery to Jackson Family Wines last January--who says the big companies can only buy up craft brewers? Corporate insists they want Siduri to remain Siduri. Of course, that just means there's more financial oomph behind what the Lees want to do, which is, "letting the individual place show through in the wines and encourage people to be honest in their reactions to the wines," according to Adam. "If our Pinots have real personality then someone is going to prefer one over another and we like to hear that."

He gets to hear that often at World of Pinot Noir, where he's been coming for over a decade. He loves to attend to "catch up with old friends. Some of these friends are consumers, others are fellow winemakers. But there’s a general sense of friendship and joy in hanging out together."

While that camaraderie is something he looks forward to, he's less looking forward to what's up with the weather. "This was supposed to be an El Nino year and a season where we caught up from the drought," he says. "Yet, here we are going into early March, and my vineyards in the Central Coast still are in the single digits when it comes to rainfall. This obviously has me worried." Worries about weather lead to worries about yield, and low yields can be troublesome for a winemaker like Lee who owns no vineyards of his own, despite having worked with several for many years. Only time will tell how many grapes he can get his hands on.

As for what he'll be pouring Friday, tasters can look forward to "a 3 year side-by-side of the Ewald Vineyard, 2012, 2013, 2014," he says. "These have been three extraordinarily great years in California for Pinot Noir, and I thought it would be fun to see the differences in the wines from these vintages." While Ewald, in the Russian River Valley, might not have huge cachet, it turns out it's 4 acres tucked behind famous names Kistler and Dehlinger. That is, we all better pay attention.
Posted by George at 8:00 PM