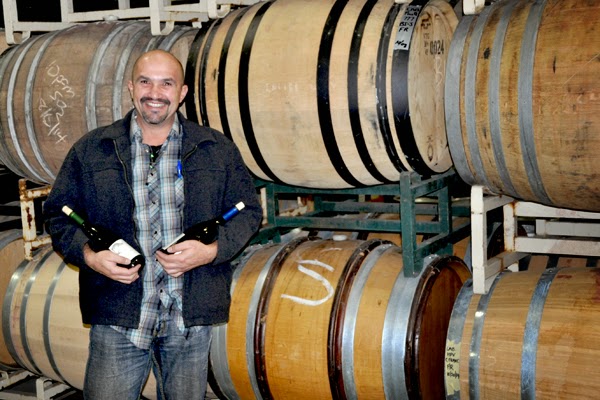 Vidal Perez, the winemaker for J. Wilkes Wines, likes to call his wines his children. When tasting from a tank of 2014 wine he'll say things like, "We were concerned about this chardonnay -- it was a preemie, the Brix was low, and there wasn't enough sugar when harvested." But Perez and his crew have their "tricks," as he repeatedly called them, and in this case it meant pumping wine from the top of the massive 6000-gallon tank into the bottom, in order "to get the yeast stirring and activate the wine even more -- we've been happy with the results." His smile after saying that is the same one a parent might beam after seeing his kid's straight-A report card.

Email ThisBlogThis!Share to TwitterShare to FacebookShare to Pinterest
Labels: a start and a nudge, J. Wilkes, KCET, Vidal Perez, wine