A Chicken in Every Fog 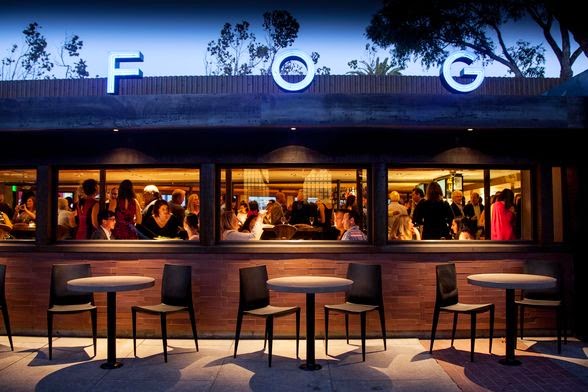 The spot had been at the vanguard of making the diner hip for decades, but while it still gives you that aquarium feel a bit, with glass around you on three sides, what's wrong with that, as you're right on the Embarcadero? It does gleam like a beacon in the night, drawing you in, and then you get hit with scents that keep you there, and we'll get to their signature roast chicken in a bit, but first there's Perry.

That's our waiter, who comes off New Yawk with his wise-cracking attitude (at least not very California cool), since we're slow to menu ponder given we're quick to share our lives instead as we hadn't seen each other for at least a year. When we do order drinks, and FC has quite a cocktail list (it might be a law you have to have one in SF now), Perry suggests we let him order for us, and he promises to take good care of us. After we warn him Chryss is pescatarian, and worry to ourselves a bit this is a trick to get us to over-spend, we give in.

And begin the Perry game--supposedly he'll pay for our meal if we can guess where he's from within 50 miles. He starts to give clues, but as we learn later, while they're all true (although I can't find him on UCLA's football squad, as he insisted, in the Troy Aikman years, and yes, I've checked), they're often meant to mislead, too. So we keep guessing each time he wanders by the table, when he drops some more non-sequitur clues--I'm Greek, grew up on a farm, as a kid rooted for the Cincinnati Reds. It's an engaging gambling game to play while dining, and at worse you lose by having a fine meal and paying for it.

Then three appetizers descended on the table, quickly followed by a kale salad that rescued itself from current cliche by including both grilled and raw kale, plus spice-roasted delicata squash, goat cheese, chili oil, lime, and the needed crunch of Marcona almonds. This could have been enough for dinner, especially given the crab cakes were amazing, seemingly all crab and simply garnished with some basil aoli and oven-charred cherry tomatoes that added a wisp of smoke to the dish. Even a beet salad was good (and you probably have noticed it's a menu that favors the classics by now), each piece perfectly cut, since so often the roots come like mini-discs; when cut a bit smaller, you can savor them more. Goat cheese ranch dressing shot with fresh herbs played a perfect foil. And then there were Brussels sprouts, again sans piggy (see yesterday's story about Maven), with Asian pear adding a bit of juice and exoticism (the ponzu and togarashi didn't hurt, either).

It was time for the evening's showpiece, an entire roast chicken, spatchcocked, arriving in a still piping cast iron pan and redolent with garlic, rosemary, thyme, and supposedly kimchi butter. Perry insists it's better than the famed Zuni Cafe roast chicken, perhaps even curses dear deceased Judy Rodgers along the way. And it is mighty-fine chicken, especially the dark meat, especially alongside the romanesco and baby potatoes done right in the pan, too, soaking up all the goodness. The white meat, I have to admit, was 97% moist, though--just a tad tad not quite there, not that I'm complaining. But when perfection seems so near....

The other entree was a swordfish special that Chryss likes practically more for its accompanying garbanzos, and that's not just cause she leans vegetarian. These were beans with a purpose, and form, and not just an afterthought. The fish was perfectly cooked.

There was a bottle of Handley Mendocino Pinot, something I hadn't had in years and appreciated--all that good Anderson Valley cherry quality, a wine waiting for food.

There where desserts--a pumpkin brioche bread pudding with bourbon caramel sauce and a dollop of pumpkin spiced ice cream, somehow nowhere near as over-rich or over-sweet as it reads, and then a house specialty, the "B" Bomb. Wish you could have breakfast for dessert, well here you go: that's a glazed French cruller, about as fantastic a fried thing as will pass your lips, topped with vanilla frozen custard and an egg yolk caramel that will become your brain's dictionary photo for yellow.

Perry, it turns out, is from ________. Well, I don't want anyone to be able to Google this up and ruin his clever game, at which we lost and we didn't care. And, yes, it was more than we wanted to spend--that's a $38 chicken, which leaves me wondering what I could get for the hens in my backyard--but was it a wonderful evening? Indeed.