Maven's Much More than a Maybe 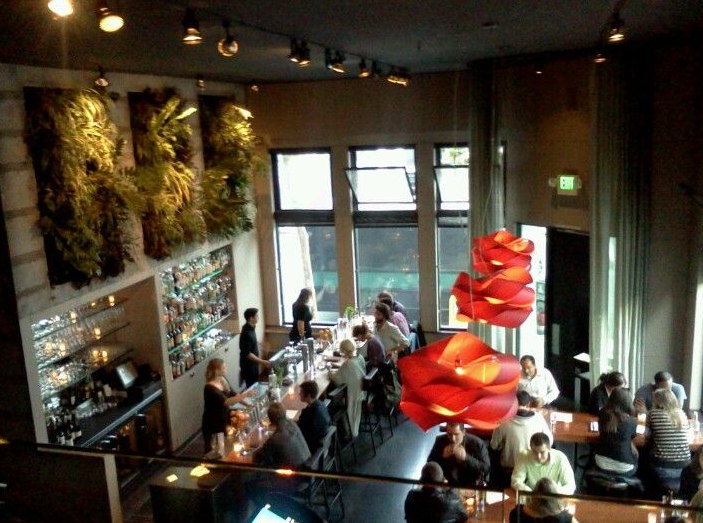 There's much to say about Maven in San Francisco, starting with the guts to name their spot with a wonderful if a bit obscure word. Then again, that is a bit of a hint as to the m.o. of Maven--there's a nod to the slightly classic age of cocktails, but a hope to update too. For instance, it works like this on the simple menu: the center offers 6 drinks and 6 plates, paired. There are other drinks and food, but they are clearly satellites to the main events.

You do want to order one of the pairings, as we did, starting with the charmingly named Corpse Reviver #598 (and we might be up to that variation of the beloved gin-based drink by now) that also includes cocchi (a white veromuth), ginger, lemon, and coriander. There's soda in it, too, so it comes up and fizzy, and the top ice cube of the glass is dusted with some lightly cracked coriander seeds, so when you go to sip, you get a healthy nose-ful. In a word, about as refreshing a drink as you could have. That pairs with Penn Cove mussels kicked up with Korean chili pepper and absinthe, and, as you have to have with soupy mussels, some grilled bread for sopping. That's right, smart cocktail folk--the absinthe you associate with the Corpse Reviver ends up in the food instead. And that ties it all up in a bright, delicious bow.

Or you might opt for The Sixpence, a drink that sounds like it might push things too far, given its last ingredient is peppercorn sorbet. The rest is gin, sherry (hip drink ingredient of the moment), mint, and lemon, but that seemingly stunt of sorbet is actually the perfect addition, a slick of frozen punchy foam--icy pepper is pretty much brilliant--that gives the drink yet more depth and breadth (the sherry helps for that too, of course). That comes paired with one of the best fish dishes I've had in some time (well, maybe till later that weekend, so here's hoping I keep up blogging about our SF-feast), McFarland Springs trout, a healthy piece of it, pink as any king salmon and with its skin cooked crisp, over a bowl of sunchokes--some little roasted nuggets, crunchy on the outside, creamy on the in, plus some whipped into a bed for the fillet to rest--that also features a clam veloute that hides a couple of actual tiny clams in it that sort of look like the sunchoke nuggets, so you don't know what you've got on your fork until it hits your tongue (a pleasant food surprise). This is all a bit rich, what with the veloute's butter, etc,. so the acid counter comes in the form of a caper gremolata, and that leaves the bowl in a perfect balance. Of course, the cocktail adds its elegance, and also helps cut the richness, too.

We also tried some crispy Brussels sprouts done in apple gastrique and not any bacon fat and just as delicious, somehow, so take that, pork.

Oh, and it's a pleasing space, too, as you can see from the photo I stole above (thanks, internets!). That's pretty much the view we had, too, from the second floor overhang (don't wear short skirts!), a wonderful sneaky spy spot for us, probably the oldest people in the restaurant/bar; so much to watch, and we didn't have to disturb any of San Francisco's gorgeous young-uns to do it.