Otto Out of Dieci 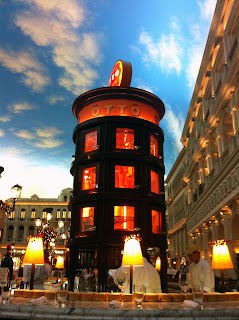 In the last 15 years the invasion of celebrity chefs upon Las Vegas has made it that you can't throw a poker chip without hitting one; if you don't lose your stake at the gambling table, you're bound to spend it at a fine dining one. The good news, of course, is those chefs (who, of course, really merely lease out the honor of their names, for the most part) do know enough to often open up slightly more casual versions of their finer, more expensive spots. (Extended digression: Who the heck supports the top top end places? There's too much money in the world if folks can sustain a place like Caesar's Palace's Guy Savoy--and I know, Michelin stars out the wazoo, real Parisian pedigree--where the "bargain" TGV prix fixe, that gets you out the door in 90 minutes, so more turnover for them and move along you cheapskate, costs $140 per person pre-tax, tip, drinks, and ends with a "grapefruit terrine" that damn well better come with gold nuggets atop.)

So, now that that's out of my system, let's get some pizza. For we're headed to Mario Batali's Otto (like the one he has in NYC), but this one is in St. Mark's Plaza in the Venetian. You will need to ask to find it, partially since it's labeled something else on the directories, if you find the directories. (Be happy, keep wandering and shopping and gambling--the money you spend in Vegas stays in Vegas.) Now, there's even real pigeons, so while it's hokey, it's going for some kind of authenticity and it is charming in that "damn this is fake, but that we bother to make this says something sweetly striving about us as humans" way. You get to sit outside and be indoors.

While the pizza is the focus, there's still plenty of other things to eat, such as a series of antipasti that are worthy of mealdom all by themselves. Especially if you do as we did and order up the Verdure Grande, a bit of 8 different veggie options, all no less then fine, and some simply stunning. And I chose the adverb simply for a reason--this is food un-frilled, direct, pleasing, and delicious. If, at times, surprising--who knew chickpea and tuna were such a good combo (evidently the Sicilians, if the menu can be trusted). The other dishes were all cooked to perfection--lentils still firm but luscious, broccoli toothsome, full of flavor and just a bit of carbonization for a caramel loveliness. Have a bottle of Vermentino with it, and you'll be very happy. 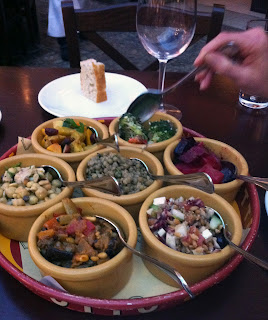 As for the pizza itself, it was good, that classic Italian from Italy style--thin and crispy crust, judicious toppings of highest quality--but while yummy, it's not as good as Pizzeria Mozza, one more hint Nancy Silverton and her ways with yeasty things are better than Mario's. Well, no one's perfect. At least the whole meal, pizza, 8 apps, plus some lovely little fried fish (that were too whole and still fish-esque for poor Circe, but I gobbled them down), plus the wine, tax, tip--you get out for less then one Guy Savoy TGV ride.
Posted by George at 8:01 AM