No Qualms about Blue Palms 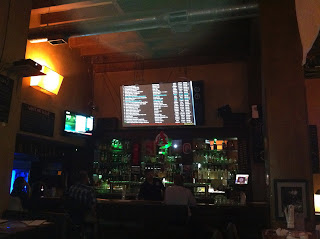 Sometimes the secret to success is not setting your sights too high in the first place. Not every dining spot has to be Jar-rific or Lucques-licious (or come with the accompanying price tag). Sometimes you just need that place that's as comfortable as your favorite old pair of shoes (if not as smelly). Enter Blue Palms Brewhouse (not that they actually brew any of their own beer--the ones they sell under their name Firestone makes for them, as Firestone slowly takes over the world*), which also has one amazing plus going for it--it's actually in the same building that houses the Music Box at the Fonda in Hollywood. That means you park once, walk little, eat and drink and see a New Pornographers or a Grinderman or an Old 97's or a Gang of Four. Then hit the easy access from there highway ramp to the 101 and are back in Santa Barbara in no time, or what us Californians take as no time as all our amniotic sacs were actually automobiles. (I'm an honorary Californian not just because I've lived here for 16 years, but because I subscribe to the motto I Drive Therefore I Live.)

As for the Blue Palms, it's hard to miss the two big boards (see the photo) that let you know what the 24 beers +1 cask offering (sometimes) are at the moment. It's usually a lovely selection of craft brew, often heavy on LA-area brewers that even San Diego doesn't get. Or, is it luckily was last week, the offerings might reflect a recent brewery-themed night, so we got to enjoy a bunch of brews from Oscar Blues, including both their DIPAs--Gubna and Gordon's. (Hard to say which is better--Gubna is more mallet, Gordon's more subtle, in both taste and ABV.) But there were also seasonal faves, like Lagunitas Brown Shugga, a caramel delight of a seasonal beer that gets a lovely extra lift from being on draught--the bubbles help the shugga go down, you might say. Even better, prices are relatively moderate for the offerings, from $5.50 to $7.50 depending.

The food is fine, too, with burgers belled and whistled (still haven't tried the one cooked in duck fat with truffle oil), offerings for those decidedly non-carnivorous (from fish and chips with sustainable tilapia to blackened tofu), and then a sausage list that's seriously Wurstkuchian--there are even several vegan options. Plus, lobster mac 'n' cheese, sweet potato fries, all that good comfort food. Perfect for soaking up the mighty ABVs the big board offers.

I need to point out the help is usually great, too--they actually know the beers, which is good when you have to choose a mere 2 or 3 per visit, as you don't want to snooze during the Music Box show.

It's also interesting to use Blue Palms as a test of the emergency Yelp system. Generally I like Yelp, but I also think I've got a sense for what kind of user comments are the ones to value and what are poppycock. The Blue Palms ratings are a veritable textbook for how user-ratings can go wrong. For most of the people who don't like the place either complain it's not fancy (which it isn't trying to be--it comes off as a bar that's been a round, for all the good and bad that implies), or complain about it after saying they don't drink beer (these are the same people who hate rides and go to Disneyland and are so disappointed) or point out they have no taste by picking the least interesting beer of the 25, like a New Belgium product or something. I mean, if I told you I found New York City a let down and told you I only got to Staten Island, what would you think of me?

*In addition to their Firestone beers themselves, Firestone makes, as you probably know, the Humboldt Ales, plus beer for places as diverse as Blue Palms, Santa Barbara's Union Ale, and Paso Robles' Villa Creek.
Posted by George at 8:01 AM