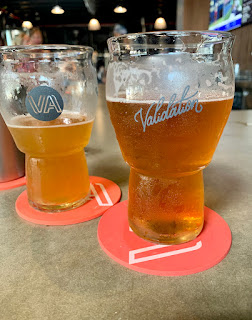 Attention to detail can be everything. Brian Deignan, co-owner of the Funk Zone’s new Validation Ale with his wife, Briana, lamented the sad state of bathrooms at too many breweries. “We built twice as many as the city asked,” Brian proudly states. “It’s like a museum in there.”

Those palatial bathrooms are just one data point to show that this couple took their tech background and rethought the ways of beer and restaurants. The two met while at GoTo Meeting; Brian most recently worked at AppFolio, while Briana has been working at Zoom since before it was a verb, as she put it. That put them in a perfect position financially to go for their dream, but it also gave them a unique perspective. Briana says, “Coming into an industry with no experience, we got to question the status quo.”