The Stars Align at Maui's Huihui 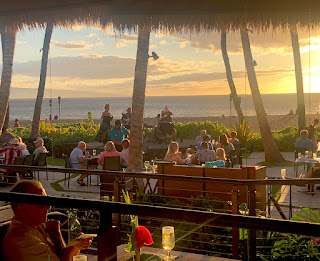 Too often in the restaurant world, when you get a view like the one that kicks off this post, that's pretty much all you get. How greedy should we be, after all, what with a stunning Maui sunset as you stare at Lanai in the distance, and yes, two talented musicians play and a non-cliched hula dancer prances in the foreground, too?
Well, Huihui, the newest restaurant to open oceanside in Ka'anapali (it's 13 months or so old), wants to deliver even more. This is a paradise, after all, so might as well pile on the goodnesses. They claim the name means constellation, which is fitting given the star-studded evening skies above Maui, but appropriate in other ways too. For example, the ceiling lights in the interior part of the smartly-designed indoor-outdoor space are arranged irregularly, so the bulbs form patterns themselves. And then there's the constellation of success the spot embraces--location, a crack staff, a yummy cocktail program, and, most importantly, scrumptious food from chef Tom Muromoto.
I didn't get great photos of the drinks, but be sure to get the Lahaina Smokestack if you like smoky cocktails. Just the name is clever, as the Pioneer Mill smokestack dominates the nearby town. In addition to its base of smoked Casamigos tequila, when they bring you the drink they infuse it with a bit of torched wood chips at the table--alas, given the sylvan breezes the smoke zips away quickly, but it's a fun touch. 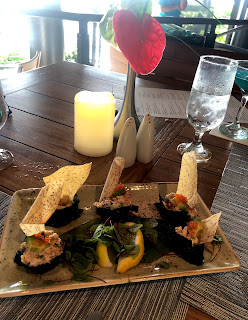 We started with the appetizer above, poke holokai, which indeed does look more like a sushi roll cut up with fins of taro chips attached (that also make delicious eating implements). The poke during our visit was ahi (it's mackerel if that fish is in season, and as an oilier fish it would have been fun to taste the difference), mixed with a smidge of mayo (for creaminess more than anything) and crab and avo. The nori worked for more crunchiness and salt. 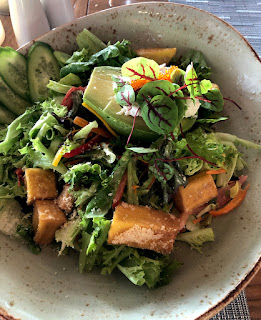 We were a bit less impressed by the Makawao avocado and crab salad, but that's for easily fixed reasons. First, the greens were underdressed, and needed more of a punch from the citrus oregano dressing. The avo stuffed with crabmeat was spot on, and they wisely served the avocado a bit under-ripe, to make sure the eating had some integrity. Then we just weren't sure about the breadfruit croutons. Certainly novel, they weren't crunchy as much as chewy, lacking much flavor. At least they bring the local and the sustainable. 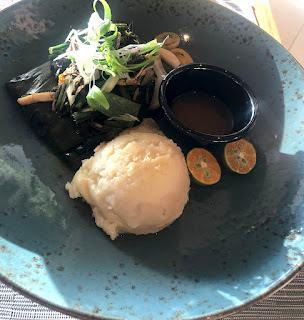 The mains kicked on all cylinders, though. Above is the tangy fish lāwalu: grilled banana leaf wrapped daily i‘a (fish), creamy abalone sauce, cilantro, pohole (fiddle fern) & ogo (seaweed) relish. That's a scoop of mashed potato on the side. Lots of local ingredients done quite traditionally, with an almost vinegarish kick, probably partially coming from those odd and wonderful orange-ish fruited lime-looking guys on the plate, the calamansi. 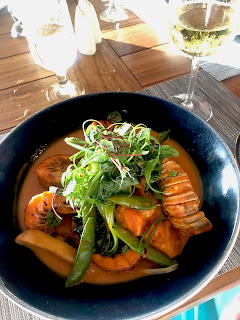 But the absolute winner of the evening was the Seafood Huihui, which makes sense--you name a dish after your restaurant, it better carry that weight. Think of it as some Maui-cross of cioppino and a noodle-less laksa. There's so much seafood in there you can easily split it, although perhaps I shouldn't use the word easily, what with a red sauce and the need to remove flesh from shells making it a bit of a dangerous bowl of food for anyone not sporting a bib (they don't offer any). Fish, scallops, shrimp with heads, lobster, snow peas, king mushroom--somehow each separate ingredient was cooked just to and not beyond its appropriate point, usually one of the failings in a stew presentation like this one. (C'mon, you've had the veggies from a crudité plate alongside the fish hammered to mush dish at less skillful kitchens, haven't you?)
Be sure to order rice to soak up the intoxicating sauce, as you will insist on having every drop of it. Rich but not too spicy, it warms more than burns, so while a cousin to a curry, it's not as much vivid as enveloping. What they admit goes into it is coconut milk, tomato broth (plus some actual stewed tomato), and roasted kukui or candlenut, which sounds like a more exotic and pungent version of macadamia from my research.
You can also ask the staff anything and they've got answers, about the food or the history of the restaurant nestled in the Ka'anapali Beach Hotel, almost all the way to the famous Black Rock, a distinctive outcrop that catches the last of the sun's rays and then is romantically lit by torches after dark. Timing melded Hawaii laid back--we never felt pressured to eat up--but we also never wound up sitting around waiting for a course. Plus any non-eating time was pleasantly occupied listening to the two musicians, blessedly under-amplified if anything. There's never a need to shout in this comfortable space. 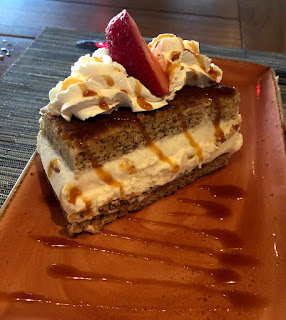 But we all might scream for a banana bread ice cream sandwich. That's macadamia nut ice cream made in house amidst the perfectly moist yet integrally sound banana bread that will make you feel you're having something homemade at a stop on the road to Hana. Sure, why not drizzle some caramel, too. 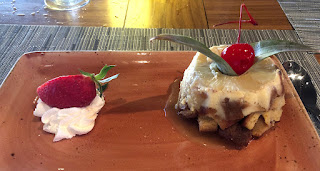 Or end with another respectful take on a Hawaiian classic--pineapple upside-down bread pudding, suffused with a tequila sauce for some boozy oomph (no, it didn't remind of over-soaked rum cakes from my New Jersey youth--this was sophisticated). The bread pudding had a perfect sweet-savory, crunchy outside--creamy inside yin yang thing going.
Huihui ends up pretty much as magical as Maui itself.
Posted by George at 8:00 AM