A Review of "Gangsters of Capitalism: Smedley Butler, the Marines, and the Making and Breaking of America’s Empire" 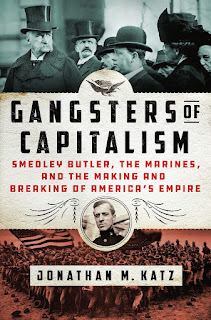 Forget about the butterfly effect, it seems the last 130 years of U.S. foreign involvement should be called the Butler Effect. By that I refer to the now mostly forgotten—despite his distinctive name—Smedley Butler, who upon his death in 1940 was the most decorated Marine in our country’s history. Those medals were awarded thanks to his work helping create a century of empire—his first action was in Cuba, and of all places at Guantánamo, during the Spanish-American War. From that point he ended up Zelig-like at the heart of every flashpoint of America’s global attentions—the Philippines, China for the Boxer Rebellion, Panama, Honduras, Nicaragua, Mexico, Haiti, France for World War I, and China again. (That leaves out his time as commanding general at Marine Corps Base, Quantico, and a brief run as Philadelphia Director of Public Safety, helping kickstart our still problematic militarization of police.)
Perhaps we don’t really know of Butler despite his exploits in our name because we like to sweep our national ugliness under the rug of history. As just one example, remember in 1980 Ronald Reagan partially ran for president against Carter for “giving away” the Panama Canal Zone that he claimed was a “sovereign United States territory just the same as Alaska.” Reagan and all those who voted for him could have profited from reading Jonathan Katz’s eye-opening Gangsters of Capitalism: Smedley Butler, the Marines, and the Making and Breaking of America’s Empire. The book is a vivid history lesson, a corrective to national amnesia, and a somber warning that we can never feel secure our democracy is, let alone will remain, truly democratic.
Care to read the rest then do so at the California Review of Books.
Posted by George at 12:28 PM