A Review of "The Ninth Decade: An Octogenarian’s Chronicle" by Carl H. Klaus 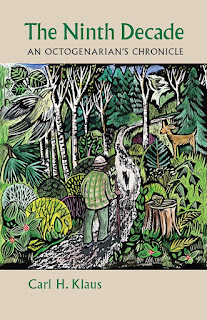 I like to think of Carl Klaus as a journal-ist. No, he didn’t write for newspapers, but his series of nonfiction books all were certainly journals, rich accountings of his life. His prose was lean and unfussy, but the more you thought about it, the more elegantly crafted it became. So, his writing was a lot like the man himself. That’s why it’s a gift that his final book The Ninth Decade chronicled his life in his 80s, a keen-eyed, non-sentimental examination of old age that he published a few months before his passing in February 2022.
Want to read the rest then do so at the California Review of Books.
Posted by George at 8:35 PM

Email ThisBlogThis!Share to TwitterShare to FacebookShare to Pinterest
Labels: a start and a nudge, California Review of Books, Carl Klaus, memoir, review, University of Iowa