Irish Whiskey Business at the Lark 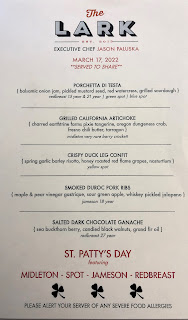 I might risk having many of you want to kick me right in my shamrocks, but I'm not a fan of corned beef and cabbage, unless that cabbage is sauerkraut and I've got a Reuben in my hands (even there, I prefer pastrami). So when The Lark suggested the menu above to celebrate St. Paddy's Day, I couldn't have been happier--not an over-cooked anything all evening!
It didn't hurt that there were eight Irish Whiskeys* also offered, including stuff as mythic as a Bigfoot sighting. I can be extravagant, but I rarely pop $600 for a bottle of booze, so getting an ounce or two of Redbreast 27 was truly a treat, but I'm getting ahead of myself. (Good booze does that to me.)
*Does the whiskey versus whisky spelling issue confound you? It goes like this: if you're drinking American or Irish, it's whiskey; Scottish, Canadian, or Japanese, it's whisky. Why? Nobody quite seems to know. But at least at The Lark for this dinner, the lovely stuff certainly made one go "eeeee." 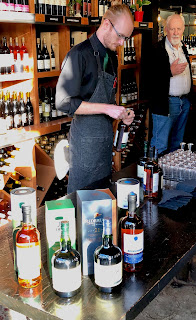 Guests got half ounce tastes of the four "welcome" whiskeys--although you could sneak back in for re-tastes if you were pushy or me. The big difference, as the Pernod Ricard rep (yep, Midleton-Spot-Jameson-Redbreast are all part of one of the mega liquor conglomerates, as probably you and I are, at this point), is with your usual Jameson Irish Whiskey, no one knows how it tastes, they just do shots. Here, you better damn well sip. So then you'd know Green Spot has a lovely minty character, Redbreast 15, with more oak, is both smoother with a longer finish, and the Redbreast 21, oh, you want to spend an evening with this one, even if you will feel its liquor-heat. Speaking of, Blue Spot is cask strength, 117 proof, and enough to make you wonder if you're sitting down when you're sitting down. But it's also complex as all heck, having been aged in Bourbon casks, Sherry butts and Portuguese Madeira casks. So it runs the gamut from vanilla to more exotic tropical notes. 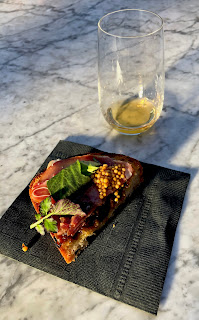 All four went down well with the passed app, since there's some mighty good grilled sourdough to help soak up the alcohol and then a lovely mix of salty-fattiness with that porchetta di testa (pig's head roulade, sliced to be presented as charcuterie) and then a zesty balsamic onion jam and pickled mustard seeds that burst with goodness (and run a bit about like ball-bearings, too).
Somehow I didn't get a photo of the artichoke course, but it made me wish there was even more of the delicious Dungeness crab on it, and seemed a bit of a puzzling choice to be served with stuff you were drinking from a Glencairn whiskey tumbler, because pulling out artichoke leaves and scraping the meat with your teeth makes for very messy, if tasty (thanks, tarragon-flecked Fresno chili butter!), fingers. Maybe other people are better at being dainty, but I was making a mess. And, of course, we were eating family style, at festive long tables packed tightly with revelers that denied we had just come out of (and have we?) a pandemic.
The Midleton Very Rare Barry Crockett served with this course had its own battle to fight--at a mere 80 proof and aged in barrels with untoasted heads, it was a more demure pour than the Blue Spot that proceeded it. Try being just a gorgeous gal after Marilyn Monroe had blown threw a room. But it rewarded with its subtler pleasures as we sat with it, as is fitting for a whiskey named after the head distiller at Midleton for five decades. 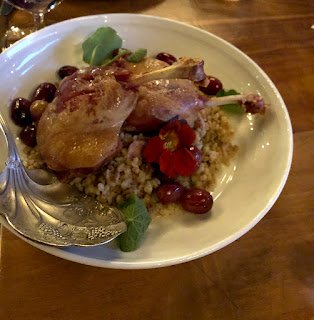 The Yellow Spot served with the next course brought home the sherry notes from the barrels it was partially aged in, and, as our presenter called it, "Christmas cake," because no one wants to compare anything positive to fruitcake, plus, that's what they call it Ireland. Just the aroma of the duck confit was insane, and serving it with a barley risotto was clever, of course, but the barley you eat is pretty different than the malt that goes into distilling. Both the pour and the duck had honeyed notes--the dish from honey-roasted red flame grapes--but in many ways the evening proved that while you can have delicious food and intoxicating whiskey together in a meal, it's hard to have them hold a truly meaningful conversation. I'd order that duck again, though, in a second (nasturtium are so pretty and delicious both). 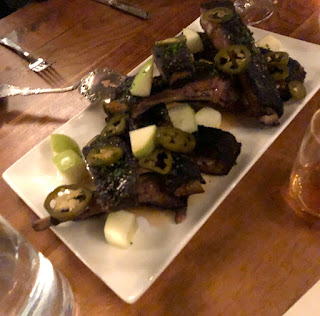 But I might order these ribs first, and I'm generally not a huge ribs fan (living with a pescatarian gives you less time to develop your barbecue palate as the best joints get meat into everything, from the greens to the mac-n-cheese to the meat itself, of course). These ribs, though--smoking made them exquisitely tender and flavorfully full, especially when lightly doused with the maple and pear vinegar gastrique, a perfect sweet-sour line of tension. And what could be wrong with a whiskey-pickled jalapeño for a bit of kick?
The Jameson 18 poured alongside is a blend of three different whiskeys, all at least 18 years old (that's what the year designation means--that's the minimum of what's in the mix), and exhibits a classic pot-still richness, picking up accents from its aging in Oloroso barrels for spice and vanilla and more from aging in Bourbon barrels, too. I'd like to call it a smiling whiskey, as that's what it leaves you doing after each sip. 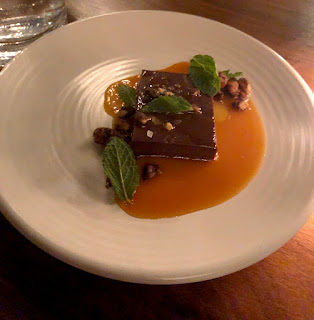 And then the Redbreast 27 arrived. Think about what that number means--AOL offered internet browsers to the public for the first time the year that this whiskey began aging. And you can see what aged better. A 109.2 proof behemoth of all you might want, and things you didn't know you wanted, in an Irish whiskey, as its aged in Bourbon, sherry, and ruby port barrels. Rich, luxurious, it even offers more exotic fruit notes in addition to the more traditional plum and cherry fruit soaked in vanilla.
As rich was the ganache, wisely salted (really the only way to enjoy chocolate fully). The sea buckthorn berry/grand fir oil sauce was a bit much for some--think mango and pineapple had a particularly tart baby--but I thought it provided a pleasing cut to the obvious richness of the chocolate. And, even to the whiskey some. So let's call this oddball the pairing of the evening?
I am a bit sad no future March 17 will ever live up to this one, for food or drink, for as the Pernod Ricard rep put it, all these whiskeys are highly allocated and he claimed to have never seen them poured at one event before. So I guess that leaves me green with Irishness, and you can just be green with envy. (Sorry.)
Posted by George at 5:30 PM