The Sound of Your Voice Yanks My Neck on Its Chain 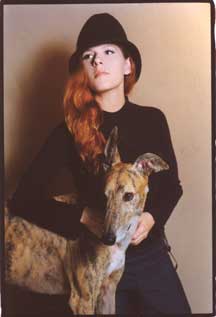 So here's a review I posted of a Case show--with Bachmann opening--back in 2007. I still feel the very much same.

It's hard not to half suspect if you see Neko Case live she won't be able to pull it off. If I have to explain "it" you just need to go listen--there's a reason her 2006 album Fox Confessor Brings the Flood floated onto so many album of the year lists, and that reason begins with her voice. It's one thing to list all the different folks it can suggest, from Patsy Cline here to Dusty Springfield there, but its sum is much more than any reference. Somehow she can intimately belt, draw you near and blow you away all at once. Of course there's beauty to it, but there's ever an edge, a bend or a smear of that perfect note, another woman's voice (and not just any woman, usually Kelly Hogan, a fine chanteuse herself) joining in to up the volume, ante up the angst. It's easy to imagine she pulls this off through studio trickery, or at the least through endless takes added up to get that seemingly simple effort (if I remember right, that's how they had to piece together Linda Thompson's vocal for "Walking on a Wire" on the incomparable Shoot Out the Lights, as she was suffering from panic/anxiety attacks).

Well, Case can do it live, folks, and how. This Saturday at the Henry Fonda in Los Angeles she performed a flawless set, to the point of running through back-to-back-to-back songs that would have been enough of a show for me: "Maybe Sparrow," "The Tigers Have Spoken," and "I Wish I Was the Moon." That's: a moving metaphor folk tune with some surprising force about how the world is tough for little things (and I didn't cry, but my throat lumped but good at song's end); a jangly (it's an overused term, but nothing fits that catchy guitar figure better) alt-rock song about how the world is tough for big fearsome but tender things; and a country torch and twang number about how the world is tough on Neko Case, but she can sure still belt about it. Those "be the one"s that repeat near the end of "I Wish"--how could any lover forsake her? Perhaps they are just too much need for one to survive in life, if not too much for performance, and it's a real danger to mix the two.

Opening act Eric Bachmann had the nerve to perform while so many concert-goers were trying to have conversations. It's a real shame, though, for Bachmann has put out many of the best songs of the past 13 years, first as the leader of Archers of Loaf (the Voidoids of the '90s), then as the major digit of Crooked Fingers, and now his first true solo album (and that's ignoring the two Barry Black discs that are terrific instrumental forays). He performed solo, but still projected, speeding up his acoustic-guitar based songs just a teensy bit. He's sort of become an American Richard Thompson 20 years younger--made his name in a band, writes great songs, plays electric and acoustic marvelously, has a voice that's not pretty (in Bachmann's case, think Neil Diamond's pipes bristled with Brillo), but matches perfectly with the songs. Plus he closed with "New Drink for the Old Drunk," one of the grandest wallows in recorded music.