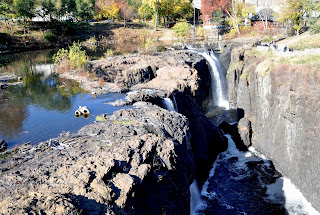 Five days after the election that couldn’t have happened, I’m standing at the edge of the Great Falls in Paterson, NJ. It’s a subtly spectacular place, as befits New Jersey, 77-feet of drop. That’s enough to be second to Niagara east of the Mississippi as something, but still almost paltry, too. You have to keep sneaking up on it to see its widest spill, so at first it’s sort of ho-hum. But you also can’t miss the noise, the thud into thunder, the basalt’s back ever broken. It’s little surprise one might decide to turn its tune into a manufacturing hum. (We’ll get to Alexander Hamilton in a sec.)

Still, trying to wrap my mind around the words President-elect Trump, it’s easy to imagine my country tumbling down the cataracts that were the heart of the nation’s original industrial core, just as this city itself fell from manufacturing grace. Paterson might be the first oxidized stop on the Rust Belt if it hadn’t just kept accepting immigrants – the turn of the 20th century Italians gave way to African-Americans to Peruvians to Turks to Muslims from across the Arab world – it’s even nicknamed Little Ramallah. My guess is they didn’t vote Donald.

But of course at the right angle the Falls’ spray wisps into vivid rainbow, so there’s that. Always the soupçon of hope. Of course we’re visiting in the fall, so the Falls themselves are less great than they can be post winter run-off, but as a Californian now, a lack of water simply seems the norm. Everything American that should be abundant has seemed to run dry – care for others, community reaching to larger community, common sense, and out west, even water. Like the clouds can’t even bring themselves to cry for us.

But Paterson is a practical palimpsest of almighty America. It really was the cradle of U.S. industry, largely thanks to Hamilton’s vision and the elegantly named Society for Establishing Useful Manufactures, shorted to the acronym SUM even though it didn’t quite fit (and somehow that’s American too). Lin-Manuel Miranda has done the rest of the work for Hamilton, of course, but as the National Parks pamphlet puts it, “In Paterson, Hamilton created what we have come to call the American Dream.” 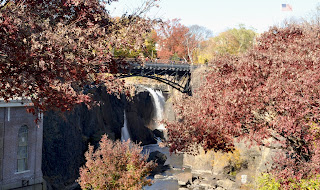 The town was Silk City into the early 20th century, it manufactured so much fabric, looms zipping with hydro-power, immigrants finding jobs, owners wanting more and more. So, of course, strikes. These did not go well – police bashed strikers mostly fighting for an eight-hour day. And manufacturing got too good for workers, as even then they got replaced by machines, or their jobs got shipped south. Nobody made them any protected trade deals.

But there’s more, for also near the Falls sits Hinchcliffe Stadium, either a ruin or a National Trust for Historic Preservation rescue – only time will tell, although time might need to count on more private than public donations in the years ahead (does a Trump administration, led by a man who thinks things dipped in gold are the height of style, seem like a source for funds for preservation?). This decaying Art Deco stadium housed two different Negro Leagues teams over the decades, and was where Paterson-born Larry Doby, the first African-American to play in the American League, got his start.

And then there’s William Carlos Williams, as we, of course, need to add poetry to race to religion to labor to history to sing our American tune. Not only from the town, he penned a poem after it, nearly 250 pages long (in its final form). They let him have a quote painted on a wall across from the Falls, painted as tall as the Hamilton statue, although no Broadway show has extolled the dear doctor. Even I have to admit his Paterson is a tough literary nut to crack, despite so many wonderful runs in it. And now we’re to be led by this deeply unserious man, one for him reading a book seems Herculean, let alone poetry. Even the most erudite of presidents never got the country to love the word (did you know Jimmy Carter is interviewed in a documentary about James Agee, just as a fan?).

Have I said I was born here, too? Across Route 80, but our interstate system didn’t exist then, at St. Joe’s. And my dad long co-owned a machine shop in town, a perfect sort of US history circle – he, son of a coalminer, got his share knowing a family whose patriarch worked machine parts in the silk mills.

Why does it seem to me all this Paterson matters now? How could it not, a sum of all we’ve democratically dreamed. The question becomes does that dream look forward or back. Here’s how Williams put it:


Doctor, do you believe in
“the people,” the Democracy? Do
you still believe – in this
swill-hole of corrupt cities?
Do you, Doctor? Now?

Give up
the poem. Give up the shilly-
shally of art.

And a bit later in the poem:


The fact
of poverty is not a matter of argument. Language
is not a vague province. There is a poetry
of the movements of cost, known or unknown .

That odd floating period of his. Must we wait to end? Or must the end wait for us?

We live in a land where many are pissed. The hopeless fly-over country that elitist me is not supposed to get. Yet I understand these people are tired of promises, especially since politicians haven’t even done that of late. So it’s easy for them to turn to the one who doesn’t really promise, as he has no plans. He just asserts, and all those not wanting to trek miles over a map – why should they go anywhere? – applaud the “you are there” they’ve felt they had and lost.

My fear is there’s something before the period, though. 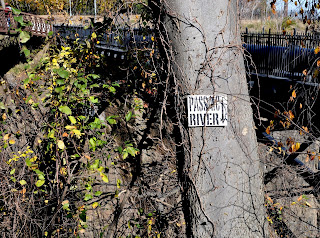