Just What the Apothecary Ordered 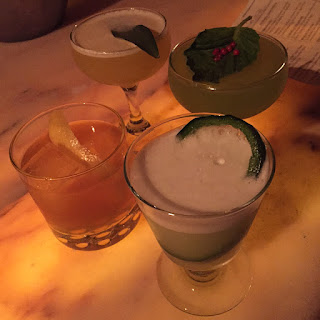 So yeah, it might seem frivolous to still blog on about food, wine, and drink while, perhaps, America as we love it gets coated in Fascist Cheeto Dust. But there are several good arguments against such a claim. First, you'll take my delicious delights when you pry them from my cold dead fingers. Second, all protest and no rest and relaxation makes George a crazed boy. Third, as the Titanic went down, Ben Guggenheim, after putting his mistress in a lifeboat, returned to his stateroom and re-appeared dressed in full evening wear. Rumor has it he also sent this message along with one of the few survivors: "If anything should happen to me, tell my wife in New York that I've done my best in doing my duty." (You read those two sentences correctly, promise.) He then had a cognac and a cigar.

Welcome to Apothéke. Hidden in the warren that is Manhattan's Chinatown (next to the oldest continually serving dim sum place in town, actually, and also recommended), it's in a spot that looks backlot, with its corners and buildings so perfectly out of Rear Window almost. But it's far from low rent: The Prescription List, as they call the menu, doesn't have prices, so there's that (drinks turn out to be $16-$18); if you can't afford the medicine, welcome to the world of Trump (bye bye ACA!).

The interior is speakeasy delightful with scientific touches (let's not call it steampunk so I can feel better about it)--rich wood floors, padded walls, low banquets, some brick, a dark tin ceiling, and lights made with apothecary-style bottles. The bartenders wear lab coats and you don't talk to them, even if you order from the bar; they are better than you, and their drinks will prove it. A good half the menu attests to their devotion to absinthe, which of course adds to the thrillingly cool "is this the last bar one of Jack the Ripper's victims imbibed in" vibe.

Apothéke's drinks do something that's hard to do--surprise yet still remain drinkable. Sure, someone could spin up a never-before-tasted concoction of navy strength gin, peaty scotch, a vermouth you've never heard of, egg white, and shrimp paste, but then you realize, "Hey, there's a reason I never heard of this." And your next thought is, "And where's the bathroom?"

While adventurous, Apothéke nails balance every time in drinks that sum up their parts as opposed to give you a series of waves of tastes. Take the Faerie's Tale, made of absinthe, gin, cucumber syrup, honey, lemon, egg white--nothing too unexpected, but then also--muddled green bell pepper and watercress. That green gives the drink a striking color greener than any absinthe could, but also grounds the drink, giving it a pleasing pepper core (that watercress is peppery too).

They like their farmers market, they do; take the Stolen from Eden, made with gin, snow pea, dill, basil, pink and black peppercorn, lime, and agave. I'm not sure exactly their process in juicing the veggies, or marinating them, or whatever the process, but they consistently manage to get flavor highlights that sparkle and please without ever getting any fibrousness, or even any of the off-characters a green pepper can bring to alcohol (just ask a winemaker with too much pyrazine in their cabernet).

And how could you go wrong with a Catcher in the Rye of rye, Amaro Nonino, hand-made honey and chamomile cordial, and peated scotch mist, or with a Paid Vacation of mezcal, tequila, hickory smoked pineapple, muddled cucumber, agave, habanero bitters, and fresh lime? These are drinks just familiar enough, but then even more complex than their more familiar cousins (chamomile! hickory smoked pineapple!).

They also garnish cleverly and inventively, with a pineapple frond in that Paid Vacation, a green pepper round in the Faerie's Tale, a basil leaf balancing pink peppercorns in the Stolen from Eden like a cocktail decked out early for Christmas.

And then we had to try this one, after realizing we were in the hands, and shakers, of masters--the Siren's Call of Ford's gin (that's the house gin), roasted seaweed, cucumber, squid ink, fresh ginger, with a smoked black sea salt rim, plus a mussel shell with a pearl that turned out to be rock candy. A bit murky in look but not as black as you might guess from the squid ink, it had a bracing oceanic oomph to it while still staying in balance, with the smoky notes helping--delightful firewater, you might say. Fascinating. 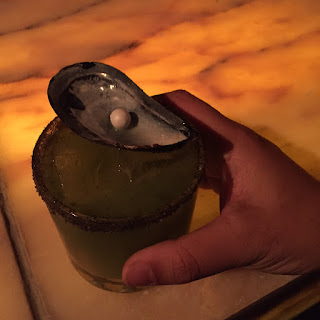