Babak Shokrian: Buying A Vineyard for the Long Haul 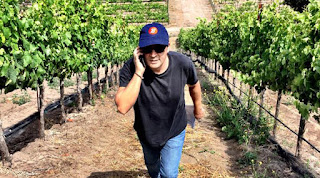 It's not unusual for people from the film industry to wind up involved with wine -- it's a cool thing to blow money on -- but Babak Shokrian's got a more complex back story than that. Born in Teheran, Iran, he moved with his family to the U.S. at an early age, got a degree in anthropology from UCLA, and began work in film.

While he just released the film Shah Bob on the festival circuit (where his previous one America So Beautiful met much success) he's also got a burgeoning project in Santa Barbara County, the Shokrian Vineyard -- what used to be known as Verna's and owned by the Melvilles.

Want to read the rest then do so at KCET's Food Blog.
Posted by George at 8:00 AM