The Secret Sauce Is Pleasure 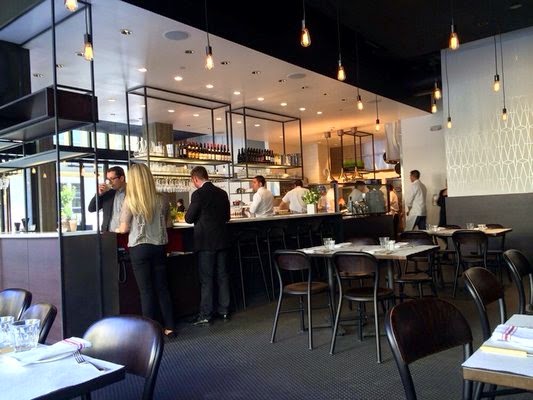 Restaurants can get too caught up in the wow to please, it seems. While of course one reason we dine out is to get the shock of the new--why go out if you can make the same meal at home?--that sometimes leads to tricks that exist just for trick's sake.

Which is why a spot like Monsieur Benjamin is so wonderful. Corey Lee of the three-Michelin starred Benu in San Francisco decided he wanted to open a French bistro. This being Corey Lee, it's not just any French bistro, of course. It's easy to think he's following in the footsteps of his mentor Thomas Keller, with Monsieur Benjamin his Bouchon. But it's more, and distinctly different, from Keller's restaurant if for no other reason than it's so urban, in a new Hayes Valley building, as opposed to cozy Yountville. (Yes, there are other Bouchons now, but let me have this for a moment.) For MB is distinctly an urban spot, as you can see from the photo above. It bustles, but has space, has classic chairs but clean lines, is windowed and open to the street just as the kitchen is open to the dining room. Think of that as a series of welcomes, of gathering one in.

For if nothing else, Monsieur Benjamin leaves you with a sense of comfort you'll rarely have. It's a deep pleasure, a sense the moment is exactly what it should be. That starts with perfect service on that balance point of friendly but not smarmy, helpful but not pushy. Ask about a dish or two, and you get a very detailed description. And when they recommend a dessert, listen (we'll get to that in a bit).

You should start off with a cocktail, of course. We seriously enjoyed The Ace (rye, calvados, sloe gin, lemon, rosemary, honey) and the cryptically named The 4th Time Around (gin, combier, Lillet blanc, absinthe, mint). Both had plenty of moving parts that danced together like the corps of a ballet, creating a unified effect of deliciousness. (And it seems sloe gin is back.) We also opted to go for the only Santa Barbara wine on the (otherwise?) well-chosen wine list, a 2012 Vallin Grenache Rose. A gorgeous wine with plenty of spine and minerality to accompany a dinner rich in sauces. (OK, I guess SF has to stand up for those wines close to them, that poor, unbeloved area, plus as a French place you can guess where many of the other bottles came from.)

For starters we went classic, escargot and sweetbreads. The snails were meaty and not chewy in the least, doused with a Bordelaise vividly green with parsley and enough garlic to have left Buffy Summers with nothing to do. The sweetbreads practically melted in the mouth and were accented well by the Grenobloise sauce of brown butter, capers, and parsley. So, yes, this is a spot to visit for a tour of the mother sauces and all their children in all their glory.

We both went with fish for our mains and didn't miss anything meaty at all. Mediterranean sea bass came with leeks, mushrooms, and a sauce Genevoise, the kind of thing that has more depth than a liquid could seem to have at its been reduced more times than the shrinking man (carrot, onion, red wine, fish heads, fish fumet, butter, of course, are just the start). Arctic char came pretending it was trout (which it certainly resembles but is tastier than) as it had almonds, perfectly roasted, and haricots verts. But then there were sunchokes instead of just some boring potato, and that was all fatted up with a beurre noisette.

These two plates were about as full of flavor as dishes seemingly simple could be. Each fillet was cooked expertly, the skin crisped, the flesh flaky but not a tad mushy. And then those sauces.

Full, we still had to consider dessert, especially since we'd heard our server suggest something that she said no one ever ordered anyway. Trusting her we had some of the best ice cream ever, palmier ice cream doused in a calvados caramel sauce. Of course the sauce was stellar, like every other one that night, but the ice cream was the true surprise, the cookies in little bits but still so distinct and crisp and butter-rich in a wondrous ice cream that would have made Berthillon in Paris proud.