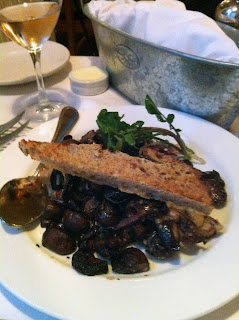 I know I perhaps seem too kind to places, too fortunate in my eating life, as if the meals I enjoy bore the imprimatur of Escoffier himself. Truth is, I tend to avoid the places I don't like, so then I don't eat much bad food. And while some of my Indy features are about places that suggest the quit in adequate, well there, dear readers, I hope you realize I write as a reporter, talk to folks about their story creating their restaurant, and hope that's an interesting read.

But today I come to praise to high heavens, to try to pay homage to one of the best meals in my recent memory. A few weeks ago in Boston we got to dine at Hamersley's Bistro, a place I've wondered about for years thanks to Gordon Hamersley's great cookbook Bistro Cooking at Home, which I've raved about before and is still one of my go-to books in the kitchen. It's a lovely warm room that manages to call out to several architectural styles without seeming confused--warm yellow-cream walls that are somewhat Provence; wood beamed ceiling that might be Provence, might be Paul Revere's house (this is Boston, after all), chandeliers that are simple and somewhat Mission style, but maybe that was just the Californian in me. It all ends up both homey and glowy at once, special but comfortable. And despite some large parties (clearly it's a place for special occasions), there's enough space between tables and the ceiling is high enough the room is a-buzz without turning into buzzkill.

Then the help, well, it's gracious and attentive, and lord I love people who get paid well enough to make a career as waiters, so they bother to learn their jobs and care. They suggest wines with aplomb and knowledge (for spring there was a clutch of pinks to choose from, and the very moderately priced 2010 Commanderie de la Bargemone Coteaux d'Aix en Provence Rosé was brilliant, flavorful despite its very pale pink rose hue); they instantly notice the cream might be low for the second coffee serving; and I swear the guy just sort of had eyes that twinkled. But of course, as he's serve Hamersley's stunning food.

The photo you see above, taken from my iPhone, does little justice to one of the best plates of food I've ever eaten, and it was a goddam sandwich. Or at least that's how it's billed--Mushroom and Garlic Sandwich on Toasted Country Bread--but that's like calling Neko Case a warbler or Willie Mays an adult at a child's game or Flaubert a teller of tales. Those mushrooms, well, the quality of them and their nifty mix of wildness certainly helped. But then he gets them to do that stick to the pan trick, too, so parts have crunch, but then other parts retain that shroomy-chewiness. Who knew a funghi could be so varied in texture? The bread was also wonderful, toasted just so, assertive just enough (for after all it's about the filling, not the bread here, and you eat it with knife and fork--it's not even a conveyance mechanism). Finally, the garlic. It's clearly roasted loooong and sloooow. Mellower than a mess of Quaalude popping clubbers in the 1970s. Yet still the essence of garlic without the harm. Better than butter, this.

As for the rest of the meal, it, too, was wonderful. My companion's Crispy Vegetable Lasagna with Ricotta, Soft Poached Egg, Leeks, Peas and Asparagus … White Truffle and Parmesan was both rich and light, if that makes sense, lasagna dressed up for an elegant bash. My Spicy Halibut and Clam Roast with Bacon Braised Greens, White Beans and Black Trumpet Mushrooms, beyond having practically every food I love in one dish, was a masterpiece of execution. That spicy part a brilliant rethinking of blackening fish, for instead of a muddled, burnt crust, it was just the right amount of herb and spice with a quick pan sear, rich in coriander seed, too. The clams cooked exactly--not overdone as they often are when supporting players on a plate.

Then dessert was another stunner, Slow Roasted Pineapple with Lime Gelato, Roasted Coconut and Cumin Shortbread. What that doesn't tell you is the thinly sliced rectangles of pineapple are not only roasted, they get brûléed at the very end, too, so become a sour-sweet sensation. Pair that with the zippy lime gelato, getting its sweet from: 1) being, uh, gelato, and 2) the roasted coconut. Triple it with the cumin shortbread, again, the savory and sweet doing a tantalizing tango across your tongue.

Ok ok, that was a totally over-the-top metaphor, but it's the kind of thing Hamersley's leads to. If you're ever in Boston, go.
Posted by George at 8:01 AM