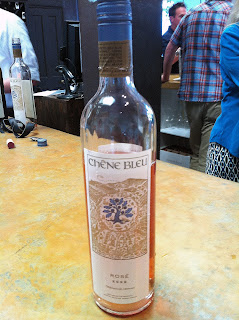 What a quality gustatory experience worth is both a tough and easy question to answer. In some ways, it's worth whatever a person is willing to pay, if that's not too tautological. I mean, if people stopped going into debt to eat at the French Laundry (it's $270 a person, now, sans tax, tip, alcohol), Thomas Keller would have to rethink the business model.

The same is true for wine, too, and wine has had to make a bit of an adjustment of late, what with the economy tanking and all. In general wine-sellers (no, not cellars) would tell you recent years have meant a highly bifurcated wine market--you had to sell your grape juice for either under $20 or over $75. Death to the middle class, as it were.

So you might wonder if the high end stuff is still any good, or is just there so folks can show off. And, sometimes, it really really is that good. Case in point Chene Bleu, a new house in France that had a small tasting in Santa Barbara the other night. Turns out they've hit it off with the Wine Cask's Doug Margerum, who is even making a wine of his own under his Margerum label from their grapes, a rose´ they had sadly run out of by the time I got to the tasting. Especially since Chene Bleu's own, a 60% Grenache, 40% Syrah blend (Margerum's is 100% Grenache), was lovely, the sort of thing Provence does so well, both flavorful and malleable, if that makes sense, calling out for food of all sorts. That wine, $30, not cheap for a rose´, but in this portfolio, definitely the entry drug, as it were.

The tricky part is Chene Bleu is top-of-the-line through and through. Go check out the website, if you don't believe me, one of the best designed I've seen in a long time--elegant, info rich, ripe with gorgeous photos, abetted by judicious use of video. They're also working at a bit of a deficit, as they're outside all the named appellations--neighbors to Gigondas and Chateauneuf-du-Pape, but even more into the magnificent Dentelles de Montmirail. That lacey limestone backdrop means their vineyards are isolated and protected and unusual. And the soil is nutrient rich.

You get to taste all that in the bottle, even when the bottle costs $100. They also like to bottle-age, so are just releasing a 2006 Abelard (90% Grenache, 10% Syrah) and a 2006 Heloise (65% Syrah, 32% Grenache, and 3% Viognier), while still insisting the wines are mighty young. Nicole Sierra-Rolet, who was presenting the wines from the winery, went even further, claiming the Abelard really needed to decant, and was a brilliant second-day wine. That said, it would be hard to imagine any making it past the first evening, it was such a gorgeous mouthful upon the bottle opening, rich red berry flavors and a persistent and pleasing pepper in the finish.

So, if you've got some spare hundreds, you won't go wrong here. Or make sure you've got some rich friends, and advise them as to what to buy.
Posted by George at 8:01 AM