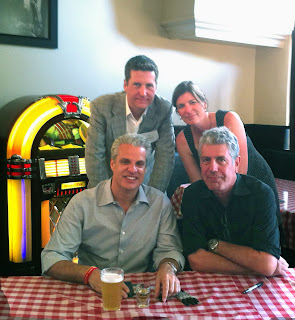 So then Eric Ripert said "You'll shoot your eye out!" and he kicked me down the slide. Or at least that's sort of how it seemed at the lightning-fast meet-and-greet after the Eric Ripert-Tony Bourdain presentation at the Arlington. Even the pose of the image above looks like it could be a Photoshop job, but can you blame them for not wanting to have to chat too long with anyone, especially given the types of questions that dominated the q&a portion of their event. I still don't get how some people think it's ok to ask a very personally focused question "I'm going to _____ in ______, and I would like dining recommendations...." like Bourdain and Ripert where there as personal travel agents, and as if the 2000 other people in the theater gave a sauteed soupcon about them our their lives.

That said the two famous chefs were ever-gracious, and managed generally to take even the most ridiculous of questions and say something interesting. And then Bourdain had to deal with a young-whipper-snapper telling him that on his recommendation from his Rome show he rushed right out to have the cacio e pepe and "expected better of you." Bourdain not only told the young teen he might get it when he's older, but he also said, "I admire your balls to come up and say that."

Otherwise, it was an entertaining afternoon, if nothing earth-shaking. Ripert firmly defended "farm to table," while Bourdain worried it merely made food more expensive and boutique. Both agreed they wouldn't eat dog, unless it was offered by a host in someone's home and they couldn't refuse and be rude. If the world was ending and they had to have their last moment within 100 miles of Santa Barbara, Ripert would head to the beach, Bourdain, ever the rock-n-roller (and clearly the pre-show recorded music was his playlist, with lots of Dead Boys and Voidoids), wanted to be found floating in the Chateau Marmont pool. The actual opening, when they grilled each other courtroom style with leading questions (Bourdain pushed as to whether Ripert was truly American, Ripert questioned whether Bourdain could really cook at all--guess which line of questioning hurt more?) seemed a bit stiff and forced, but they seemed to be having fun, so why shouldn't we? As Bourdain says, "After all, we're in the pleasure business." Nice work if you can get it....
Posted by George at 8:01 AM