Is It the Dressing or the Stuffing that Makes This So Tasty? 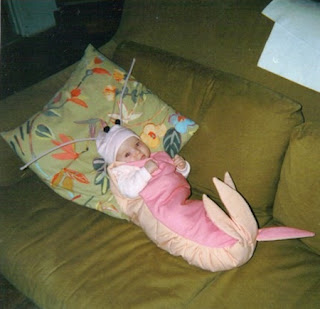 I've written about it before, but just so you know, Santa Barbara is home to the baby ridgeback shrimp.... OK, wait, this comes from Buzzfeed's 20 Babies Dressed as Food. Which makes me feel a lot better about not having kids, given how much I like to eat. I mean, how could you not experiment? I figure till they're about three-years-old they're yours, aren't they, so you should be able to do what you want. It might even be the environmentally sound thing to do, as you grow your own food, eat as local as possible, and reduce the global population all in one tasty meal.

Seriously, it really means that parents have too much time on their hands, and too much disposable income to make costumes that make their children look like food. Which, if you think about it for as long as it probably took people to make some of these outfits, and that better be a long time, and they better not be mass-produced somewhere (picture this: a Chinese factory with underage, poorly paid Chinese girls working a line putting together hotdog suits so American children can dress up as the food the Chinese workers can't afford to eat themselves), you just have to end thinking a profound thought like, "Huh?"

Plus I'm rethinking that next serving of baby vegetables I get at a fine dining spot.
Posted by George at 8:01 AM