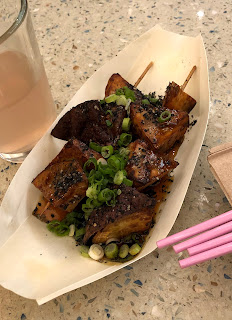 You have to appreciate how Acme Hospitality never rests on its laurels. Sometimes it hits from day 1 (The Lark), sometimes it has to re-brand and give a bit of a ramp up time (La Paloma), and sometimes it just heads in another direction, say Gold Rush country, to open historic hotels (National Exchange). Now it's doing a clever re-think of the Funk Zone's Tyger Tyger, shifting to a mostly plant-based menu if keeping the generally Southeast Asian vibe going.
Consulting chef Jasmine Shimoda helped shape the menu but the day-to-day operation is led by Trevor Lamance. You have to hand the team a whole lot of credit, for they're helping bring food to Santa Barbara that hasn't been here up to now. And lord knows we could use more plant-based options--better for the health of our own selves and the planet. (Yep, I'm a hypocrite and still eat meat, but I try to eat a lot less of it.)
The menu isn't huge, but it grows as the day goes on. I still have to check out the breakfast, which sure reads tasty, from the obligatory avo toast to the breakfast sando that features an egg omelet you can sub with a tofu scramble, bacon you can sub with tempeh bacon, and then pickled Fresno chiles, spicy cilantro oil, house fermented hot sauce.
We were there for dinner and over-ordered (but this stuff does take home and eat well the next day, promise, at least the salads and noodles). We kicked off with the daigaku imo, shown above, Japanese sweet potatoes soft on the inside, crisp on the out, sitting in a scrumptious slather of tamari-maple glaze. You need to be sure to cover each bite of your potato with this sweet-salty sauce and then get a healthy sprinkle of the scallions, too. Simple yet totally rewarding. 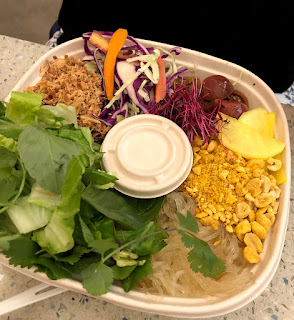 This is the tea leaf noodle salad, seemingly simple too, but full of bright flavor, from the cilantro to the peanuts to the fried shallot, and the fermented green tea dressing is what you'd always hoped Green Goddess might be, something with a bit of soul. 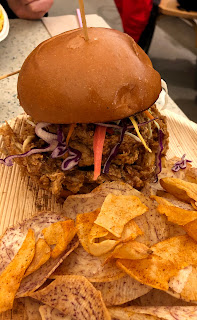 Here's the show-stopper, a fried yuba sandwich, or TT's answer to Nashville Hot Chicken by way of Saigon. Instead of fowl, that's "chicken-fried" tofu skin, so you get all the delight of crunch and texture without any of the guilt of eating an animal. It's one of those "barely-fit-in-your-mouth" monster servings on a tasty brioche bun, if you can't tell from the photo, so worth sharing. While it's doused in some chili-maple and yuzu ranch dressing, it was a teensy bit short of the heat it needed to become truly transcendent. But it's a delight to munch on, and could convert any meat eater to the vegan way. 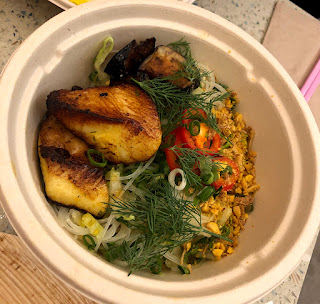 For the pescatarian in tow, there's cha ca la vong that comes with the local catch of the day--this evening a black cod--marinated in a vivid turmeric-dill sauce with plenty of aromatic fresh dill atop. Consider this Tyger Tyger in a bowl-shell, as it were, food that makes you pay more and more attention to it, drawing you in to its direct pleasures, especially with the springy vermicelli noodles awash in a singing nuoc cham bringing oodles of umami. 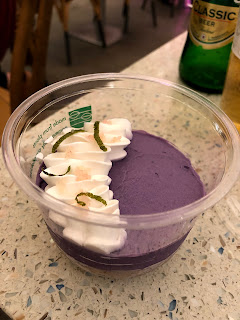 Desert is a daily special and we got to enjoy a perfectly purple ube "cheese"cake that was vegan thanks to coconut milk doing the dairy-work. Creamy and delightful.
Posted by George at 5:30 PM