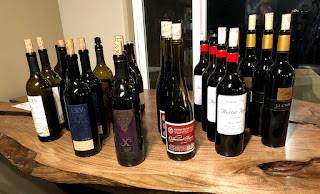 The best laid plans of writers and procrastinators.... This post should be much more detailed than it will be, given the dinner it's about happened December 3 and it's now nearly a month later with lots of holidaying under the bridge. But I would be greatly remiss if I didn't praise the warmth, kindness, and delight of an evening spent at the home of Kunal and Neeta Mittal of LXV Wines. They graciously hosted a slew of media folks and fellow winemakers as a way to kick off Cabernet Franc Day, the bulk of which happened on December 4 at Cass Winery, and which, thank god, I already wrote about. (Plus I had notes. It's so hard to take notes while trying to be a good dinner guest, it just seems rude.)

Above is the wine line-up for the evening, so that might be a bit of the reason I don't have total recall of everything ate and drunk. Not that I was the latter, but still. I certainly recall the delicious odd duck (no, not cold duck) of a welcome wine, the LXV 2021 Blanc de Sangiovese, and yes, you read that correctly. The couple had a similar wine once in Italy so insisted on trying one of their own, made with the least amount of skin contact possible from fruit from Santa Barbara County's Whitehall Vineyard. The result is racy, playful, rich, quaffable. A conversation starter and a bottle-finisher all in one 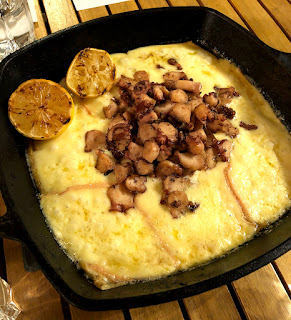 On to the many amazing courses of food. Neeta loves working on pairings, and her hope with the menu was to connect with Cab Franc's core notes of floral aromatics (often violets), fruit (generally strawberry and raspberry), vegetal character (bell pepper), and earthiness (crushed gravel). So above, we begin with that floral note by echoing it with a raclette cheese griddled to gooeyness, piled with seared sous vide octopus and then drizzled with lemon and violet oil. I have to admit I generally am not a fan of over oiling the flavor onto a dish (all those years of crappy truffle oil ruined me), but this combo was perfection, especially when it got an extra splash of the violet oil. This paired perfectly with the LXV 2020 Reserve Cab Franc, a very California-style version of CF, hearty but balanced and redolent of all sorts of aromatics, from lavender to sage. 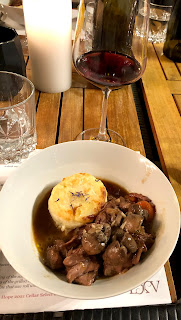 Course two was Boeuf Bourguignon with an island of scallops potatoes amidst the sauce. Starting as a standard interpretation even Julia Child would appreciate, Neeta gave it a personal twist with a hit of green cardamom (and let's face it, Bourguignon usually could use something to give it lift, as after the first few bites it can get pretty samey) plus some miso in the stock for extra umami and richness. That paired with one of my favorite wines of the weekend, Union Sacré 2020 Cabernet Franc. Go read the other post to see what I thought about it. 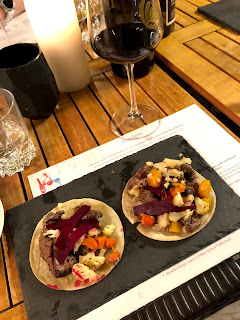 So, that's a lot of food with two courses to go. Luckily we next just had a little lamb, atop two street tacos. The meat, braised in herbs, was tender and earthy, the roasted vegetables adding some smoke and brightness at once. A complex dish, it deserved and received a complex wine, Austin Hope 2021 Cellar Select Cabernet Franc. A big boy (as one expects from Austin Hope) at 15% ABV, it came off as controlled power, savory and spicy. 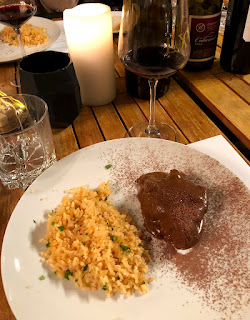 For course three we turned to Cuernavaca for a dish dear to Neeta and Kumal's hearts from a time they stayed in Puebla--chicken mole with rice. Evidently XLV has a masterful Martha in its kitchen who knows the multi-ingredient secret blend for this mole that suggested all sorts of flavors depending upon your bite, from cocoa to coffee to all spice to anise, and a semi-serious kick of chile hit, too. It successfully paired with J Lohr 2017 Cuvee St E, a take on St. Emilion featuring a blend of 63% Cabernet Franc, 30% Cabernet Sauvignon, 6% Merlot, and 1% Malbec, which no doubt is what makes the blend. Seriously, it's a serious wine with plenty of time in new French oak to give it a robustness while not masking any of the wine's nuance.
Given that wine, it wasn't too surprising that the affable Steve Peck, Director of Winegrowing at J. Lohr, also brought along a real Right Bank Bordeaux...with maybe a few more years on it than the rest of the wines we drank that evening. He even got the cork out clean. As often is the case with such a bottle, it was more an experience than deliciousness, all that cedar and graphite, but still some fruit. Peck had a story about how the bottle had been given as a gift up and down Willow Creek Road from different wine fans, and he figured it was time to share it with all. Which only goes to show the generosity of the wine community. While Cab Franc pairs well with a wide range of foods, it pairs even better with memorable hospitality. 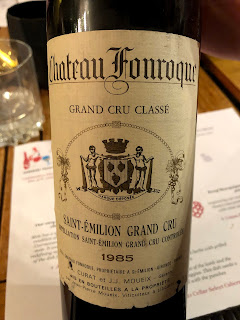