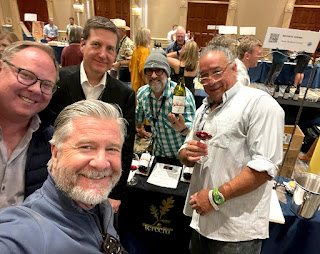 Despite the many years I've been fortunate enough to attend the World of Pinot Noir (and is there a more annoying way to start an article?), I've never quite cracked the nut on the best way to cover it. There's just so much, and that's only considering Friday's and Saturday's Grand Tastings events. Over the two days at least 165 wines poured over my palate, so distinctions can get a bit blurry, and I'm not just talking about my handwritten notes.
That said, I decided one way to approach this year is splitting up some highlights into two different stories, this one called Old Friends, and then a later post I will call New Finds. (There might be a third post called Some Foods.) And to prove how hard it is to follow even my own outline, I'm going to begin with an old friend creating new finds--Larry Schaffer and his tercero wines. Those familiar with him know him to be warm, wise, chatty (he named two of his wine blends Verbiage), and an endless experimenter. He makes mainly Rhone varietals, but then there's that quenching Gewürtz he calls Outlier (since no one can pronounce Gewürztraminer), his Aberration red blend he asks you to chill, both a Cinsault and a Mourvèdre rosé.... He's hard to stop.
So, of course, he had to give in, finally, to the clarion call of Santa Barbara County and make some Pinot. And what did he show up with at WOPN? Four! All his 2020 fruit comes from Kessler-Haak and he's made a blend of three clones, each of which you can buy bottled on its own, too. Think of it as a delicious science experiment. As he put it, he thinks in Rhone terms, and compares the blend to a GSM, with the 113 clone playing the Grenache and providing the high notes, the Pommard 4 taking the Syrah role and providing the balance and bulk of fruit, and then the 114 doing its Mourvèdre impression and providing the undertones. At this point I think the blend stands out as it is so balanced, but who knows what time might show--the 114 seemed youngest as a solo bottling, and those who like their Pinots floral should gravitate to the Pommard. But, as always with Larry, it's all good. Especially if you get some of his homemade blue cheese bread with it, as tasters got to do. (Plus, bonus Shelby Sim of Visit the Santa Ynez Valley usie at the table--a good thing, as I'm so bad about taking photos of people.) 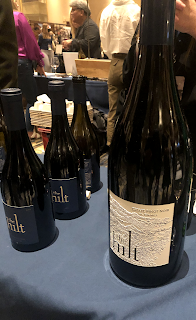 Of course if I go on at this length for every wine/winery I hope to write about this post will be longer than a CVS receipt and less valuable (and darn, I do need a two-for-one on toothpaste after all the red wine), so I'll try to speed things up. For example, here's a two-fer, what the pourer at the Hilt table called "The Matt Dees fun zone," since their aisle portion backed right up to the Mail Road position on the next aisle. I have praised Dees many a time and surely will do so again, but geez he's rocking it. At the Hilt has the the home field advantage of getting to play with Radian and Bentrock fruit (more on both in a bit), which means such wildness and bite to the wines in the best of ways. You can't drink the 2019 Hilt Radian--a wine to geek out on--without doing your best Colin Clive imitation and shouting, "It's alive!!" 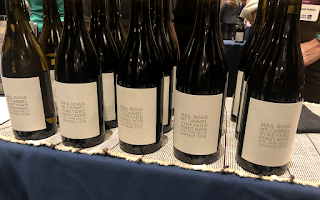 Meanwhile over at Mail Road they were offering a vertical from 2018 to 2015, which was fascinating as the wine shifted from even to odd years, the former ones more opulent, the latter more Burgundian. Talk about a lesson in vintages, at least at Mt. Carmel Vineyard (we will visit Mt. Carmel again in the New Finds write up). Another lesson, I make a funny face when I silently express my joy in tasing a good wine, at least based on the pourers at this table after I had theirs. When one asked which vintage I preferred, I could only reply, "The last one I have tasted." Power, elegance, grace.
As for Hilt follow ups, I generally spend some time making sure I get to taste as many wines made from Radian and Bentrock as possible (and thank you, Matt and owner Stan Kroenke for still selling some of this fruit--how sad our area would be if everyone clamped down on what they owned like we were some BS place like Napa). Those sites never make anything less than very good wine, but two particular standouts this WOPN were the 2018 Radian from SAMsARA, which pushed the racy Radian experience to a delicious edge thanks with 100% whole cluster and 50% new French oak, and the 2015 Montemar Bentrock--yep, that's their current release of it, and it might have needed all that time as it's still a gnarly monster of Pinot goodness. 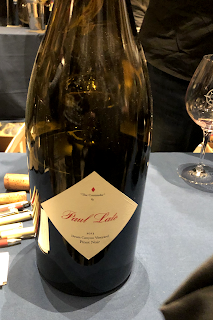 Speaking of monsters, I like big format bottles, I cannot lie, and every WOPN Paul Lato is sure to deliver on that front. It's always bit of a zoo at his table, but that 2013 Drum Canyon you see above was worth it, a spectacular expression of Sta. Rita Hills fruit with oodles of spicy notes and a finish longer than this whole blog post. Same for a Brewer-Clifton 2010 Cargasacchi from a bottle nearly as tall as me (I might exaggerate, but only a tad), the kind of pour you just walk around the hall and finish, as it would be a sin to pour it out after it waited for you, just getting better for over a decade.
Not to be outdone with wines with some age, Gray Hartley as usual was behind the Hitching Post table with two oldie-but-goodies, a 2000 Sanford & Benedict and a 2002 Fiddlestix. The former had some bricking, sure, but still so much life, and then old notes only French Burgundies are supposed to get like graphite and tea. The Fiddlestix was so vibrant you wouldn't guess it was two decades in, and then amidst all the fruit, some mushroomy notes began to bloom on the finish. Such fun wines, and one of the reasons you go to an event like this--to get what you'd never have a shot at otherwise. I mean, he wasn't even hiding these under the table.
Then I want to highlight a few wines that just capture a sense of place, and in one case even a sense of an era. You could almost start a friction-created blaze trying to pass people to get near the Sea Smoke table (get it, where there's smoke there's fire?), and the 2019 Southing struts like the Sta. Rita Hills on steroids, and I say that as someone who loved every one of Barry Bonds' 73 homers in 2001, a pre-pursuit of balance year this lovable lug of a Pinot also reminded me of. Foxen rocked, as usual, but this WOPN I was most taken by their Santa Maria Valley bottling, in particular the 2017 Block 8 Bien Nacido. That's BN's highest elevation, so maybe that helps make it so wonderfully aromatic I was practically content just sniffing it, but after tasting it wrote "people don't know what cherry in Pinot Noir is if they haven't tasted this wine." 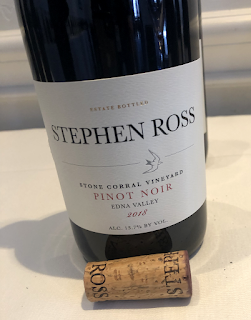 Continuing north through California up Edna Valley way there's the 2018 Stephen Ross Stone Corral Vineyard, a site Ross shares with the alas not at the event Kynsi. Kettmann in the Wine Enthusiast put it this way, "Dark-cherry and black-raspberry aromas meet with loads of crushed slate and dried loam as well as hibiscus and rosewater on the dynamic nose of this bottling. The palate is also very rocky and mineral-driven, while showing darker plum and purple-flower flavors." That works. The mineral-driven nature really woke up my palate on a long Saturday afternoon. 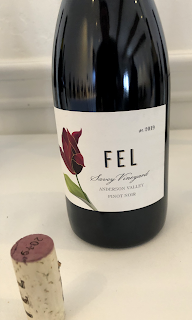 To almost end, let's consider something northy north in California, one of my favorite vineyards, Savoy in Anderson Valley. Now owned by FEL, I've been going there since it was Breggo many moons ago, and it still makes one of the most elegant and haunting of Pinots. It's as if you can sense the nearby redwoods lurking in each bottle.
All that said, I'd be remiss not to mention two of the better out from under the table moments. Despite Chardonnay being Pinot's Burgundian brother (or is that sister? does it depend upon the wine?), and despite almost all of the wineries present making both, it's kind of considered bad form to play up your Chardonnays. Some place just went and poured them, and more power to them. Some hid theirs away. For example, Liquid Farm offered me a 2015 Golden Slope Chardonnay and lord knows it deserves its tip-of-the-cap name to the Cote d’Or, so creamy and luscious (it almost recalled one of my favorite SBC whites, Stolpman's L'Avion Roussanne, somehow).
In a complete different, equally pleasing way, Greg Brewer had his latest just-to-be-released 2021 Diatom Chardonnay hidden away. As Brewer puts it on his website, "Diatom is motivated by the pursuit of subtraction and refinement," which makes it a vision of purity. Alas, at that point in the tasting, close to close at 6 pm, I managed to make this brilliant observation as he drew the bottle out and said it was his new release, "You mean a 2022?"
Uh, no, this year's wines aren't released yet, as they are still sleeping in baby buds, dummy. I do want to give myself a bit of a break, though--what with no in-person WOPN last year, and the excitement of getting to see so many great wine friends again this year, it's tough to know what time it is.
Posted by George at 5:30 PM