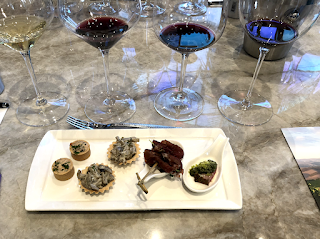 “I could see the excitement in Bill’s eyes because of this space,” recalls Warren Nocon, who’s been managing the Hotel Californian since it was opened by the original owners in 2017. “It led to one of the fastest sales of a hotel I’ve ever seen.”
That space, formerly a boutique, will be unveiled this week as The Society: State & Mason, the new Santa Barbara home for the Foley Food & Wine Society. And that Bill, if you don’t know, is Bill Foley, a businessman whose bio features the abbreviation NYSE quite a lot. But most importantly, at least for this story, he also owns 23 wineries around the world, assuming he hasn’t bought one since this story was filed.
Care to read the rest then do so at the Independent's site.
Posted by George at 8:00 AM