Repeal Day is one of those odd negative holidays--hooray, we're not getting beaten anymore!--but that said, aren't you happier you have a glass of something in your hand right now? Even if you don't drink, I hope the notion of Prohibition, saying you legally can't do something that's not morally wrong, should rankle. Well, December 5th was repeal day, the 85th year of the return for legal drinking (and producing and selling) in the USA. And there's just one MAGA I support: Make America Grape/Grain Again.

All that's prelude to getting the chance to sample the latest cocktail creations for the fall-winter season from one of our town's masters, George Piperis, at the Finch & Fork at the Canary Hotel this December 5th. I've had the luck to drink with and write about him before, but he's the kind of talent that lands drinks in Imbibe Magazine and geeks out on his milk punch project, which he talks about like making boozy cheese in reverse, and along the way points out Benjamin Franklin did it first. Hoping to have it ready for Christmas, he concludes, "I could do an eggnog, but that's so boring."

Boring has no room in a Piperis menu. The current one carries over some of the previous's greatest hits, from the delicious AND gloriously goofy Barbie's Bath Bomb to the old fashioned with the very new wrinkle--he washes the bourbon in duck fat. But it's the new creations I want to highlight, as in their breadth and depth they astound at every turn. Take the You Got Chocolate in My Peanut Butter, a nod to the old Reese's ad, but Reese's never tasted this good. 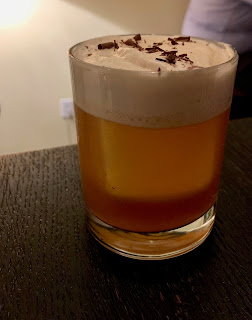 (Note these images are all on the fly iPhone photos--follow Piperis on Instagram to see them photographically pimped out.) This time it's Toki Japanese whisky that gets the wash treatment, but with peanut butter. The chocolate comes from Tempus Fugit créme de cacao and some chocolate shavings across that lush peanut butter foam that's so rich and flavorful you'd order it on its own. Despite that creamy top, Piperis asserts (rightfully), "It's not just a dessert cocktail--the most masculine man can drink it." Well, as long as he has some taste.

Then there's the Tryna Send It, which he calls one for the kids who work with him. At this point I felt truly old, but fair enough, I don't know snowboarders yell encouragement by screaming, "Send it!" Piperis wanted to make a "good Long Island Ice Tea," is how he put it, and that's a challenge, as the usual LI Iced Tea is simply "how many alcohols can we mix in one drink and make it sweet enough you want another?"

His drink still delivers a boozy punch, but does so with velvet-gloved elegance, starting with the garnish of candied ginger heavily-dusted with his own fermented spicy pineapple sambal--he warns me to mix it moderately into the drink, as it does have quite a kick. The drink is composed of pineapple juice, Casa Noble blanco tequlia, The Funk rum, and Singani 63, a Bolivian unaged brandy Piperis calls "real trendy." 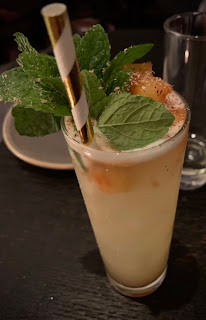 One of my personal favorites now on the list is the Captain Jack Sparrow, as I'm not trendy at all. I'd like to think of as more a Keith Richards than a Johnny Depp drink, myself, full of depth, unflashy skill, and surprisingly well-aged. It kicks off with Jack​ Daniels rye, off course, but earns its buccaneer bona fides in several ways, starting with Chairman’s Forgotten Cask rum (turns out Chairman's actually found a barrel and no one knew what production it was from). To tease out rye and rum flavors in some of their most varied directions there's Tempus Fugit banana liqueur and a roasted banana slice for garnish, and then a few shots of both blackstrap and tobacco bitters, the latter, oddly enough, not made with any tobacco but with bacon fat and coffee. (Beware, vegetarians!) 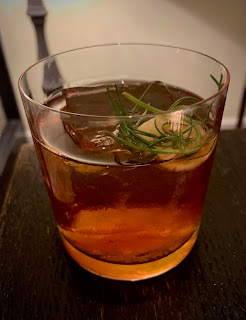 Piperis compares the drink in composition to a Boulevardier, but think a boulevard in Barbados, maybe. And no, it's not too banana in the slightest--it's a drink where all the parts add up to one lovely sum.

It's a fascinating companion to another more classically-conceived drink I don't have a photo for, Hayden on Holiday, named not just for the Basil Hayden in it but also a friend of Piperis who is always on vacation. (And given the season and our location, how do you not do a "holiday" named drink?) Definitely a drinker's drink (you know who you are) the namesake bourbon get the smoky punch of mezcal, too, plus Sfumato, an Amaro made from artichoke that's lighter and smoother than the better known Cynar. Add in some Cocchi Teatro Dopo and Thai bitters, and help people realize casks add coconut notes by drizzling coconut oil on the one big rock in the double highball glass, so the ice looks like it has a snowy cap, and the smell hits you as you go in for every sip. This is a deep drink, one worth much slow consideration.

If you want to go with what seems to be a very Santa Barbara drink, it's hard to pass on the Daughter of Man that, with its eucalyptus bitters and eucalyptus leaf tied alongside, Chryss joked, "Smells like a koala's butt." Having not been upclose with those Australian critters I can't say for sure, but the drink itself brings together Copper & Kings brandy, honey crisp apple, a black currant reduction with red wine, honey, and those bitters into a refreshing very unusual drink perfect for this time of year. Sweetish, without being sweet, fruity, but not too. 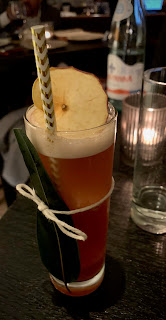 Then there's version 2.0 of last menu's In the Pines, this time featuring Death's Door Gin, a sure way into this gin-lover's heart. (1.0 had mezcal.) Of course the gin is pine-y to start but it gets extra pine power from Zirbenz, a stone pine liqueur from the Alps, plus an at the table dusting of pine pollen, fragrant as a field of Christmas trees, and supposedly an aphrodisiac to boot. Add some Cardamaro (Piperis likes those cardoon-artichoke Amaros) and Cocchi Torino and you have a drink deceptively smooth for all its gin. 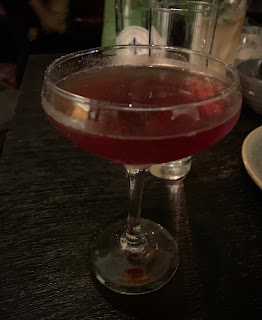 Piperis sums it up this way, "It's an aggressive menu for this market but I'm just proud of it." And he should be, as it's playful, powerful, challenging, comforting, and most of all downright delicious.

Speaking of, Peter Cham, the executive chef, has the kitchen firing on all cylinders right now too. For example here's the most lovely of scallop dishes I've perhaps ever-eaten. 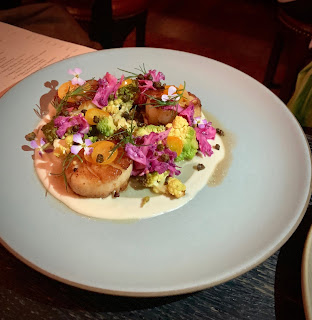 Perfectly seared to be nearly crunchy on the outside and just-cooked but cooked inside, the scallops sit atop a rich brown butter cauliflower puree. Then the plate is artfully strewn with romanesco, roasted to just the right toothsomeness, pickled kumquat, as vividly tasting as they look, crispy capers, and enough edible flowers to make you feel you're eating at a florist. Gorgeous plate of food. (And a great pairing with the Tryna Send It.)

Same with the trout, again showing off Cham's skill with brown butter, this time made with toasted hazelnuts. That's buried in broccoli florets, more toasted hazelnuts, and the most eye-catching of greens. And along with the brown butter, it sits atop green goddess dressing that will make you think young you might have been onto something liking even the blandish bottled versions of it (I'm remembering you, Seven Seas), and warm multigrains to give the dish yet more crunch. Eat it with an In the Pines and you'll feel like you're out fishing on a tranquil Eastern Sierra stream. 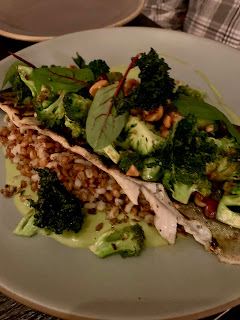