So it's simple. We do this: 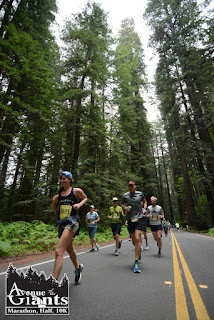 So we can do this: 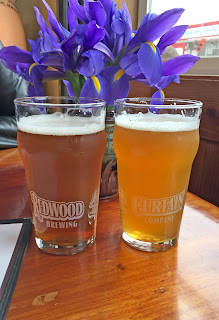 That first part, though. It's hard.We are joggers, not runners, in the way that we are cooks and not chefs--nobody is paying us for our skills. But that doesn't stop us from doing, and that's a half marathon in a nutshell--just keep doing. There are all sorts of tricks: have a bouncy bit of music run in an endless propulsive loop in your head (the chorus of this one kept me chugging); try writing in your head so you forget your body; pick other runners as pace rabbits and try to stick with them; count the distance up to 6.5 miles, just over an easy 10K, and then back down, comparing the distance left with trips you know you can do easily ("heck, this is just our house to State St. and back!"). And, of course, for this run, you just had to look around and think, "Goddam world so pretty!" A bonus of being slow--you have that much more time to take it all in.

Beyond staying hydrated, I like running on an empty stomach, so post race our first need is coffee. We can't even make it all the way back to Eureka, and instead visit Victorian Ferndale, which was recommended by one of the race volunteers at the packet pickup the day prior. It is something--looks like a movie set. 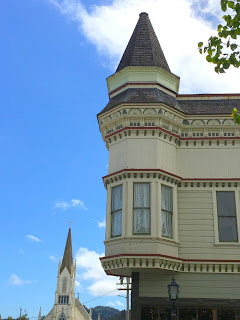 You even have to get there via Fernbridge, a concrete arch bridge from 1911 (things weren't so wide then) over the Eel River (they're really lampreys and the difference matters to eel people). Despite all the old-timey, good-feely stuff, there's still the Mind's Eye Manufactory & Coffee Lounge--caffeine, tasty baked treats, and a maker space. Yeah, we find the hipster place in the squarest place every single time.

After hitting our Air BnB for a well earned shower, it was time for BEER! We decided to also check out Arcata, Eureka's northern neighbor, so saw more of the down-on-its-yet-digging-them-in-heels Eureka and drove over the causeway looking for Redwood Curtain Brewing Company, since it's best to try stuff that you've never had. You see our first two pours up top; the one on the right was mine, the cleverly named Sellick Stache American Pale Ale. Here's how they describe it: "Magnetic aromatics of citrus blossoms with an essence of spring pine, followed by a gentle earthiness. Tropical Starburst fruit with a firm dankness blanketed with our signature bready mouthfeel." As my first beer after the half, I describe it as heaven. It did just the right amount of hops bitter with rich malt mix at a not huge ABV (5.6%) as a fine place to start the drinking day.

We needed food, too, and luckily there was a food truck, because that's what chill breweries do now. LoCo Fish Co. was parked outside, and Chryss went for some bowl thing while I didn't listen to their name and thought "cheesesteak!" It was good, but had a design flaw; they upgraded it some with goat cheese instead of good ole American or cheddar, and while that's great for flavor, and Humboldt local to boot, it's the wrong texture, too dry for a cheesesteak. Not a huge problem--I still ate the whole thing, but it meant I needed more beer, that's for sure. 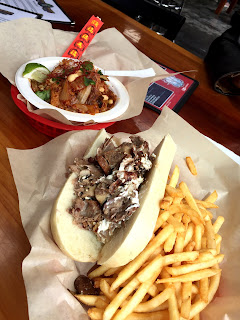 And that was part of Redwood's intriguing Funky Notion series, AKA brewers play with brett. All of them were fruit-brewed, but I opted for La Baie D'Oie, because who gets enough gooseberries in their life? Here's their take on it again: "Tight and dissipating head. Golden sunburst in color. Pleasant aromatics of sweet yet acidic Nopales cactus, prickly pear and slight desert horse blanket. Firm and gooseberry mouthfeel followed by a tender nectar with approachable acidity. Brewed with Simpson Maris Otter, Weyermann Pilsner, Weyermann Munich, Crisp Wheat, Tettanger hops and our Proprietary Belgian yeast strain. Aged for 12 months on French Oak barrels with our Wild Yeast Blend and then aged on gooseberries for another 6 months." Luckily, I didn't get much horse blanket, but did get much sour delight.

Let's skip ahead, already, to dinner, then (I think there was a nap--every good race deserves a nap), or should I say pre-dinner, for in the very building in which we were staying on the third floor (even harder to climb those stairs now) was Humboldt Bay Provisions on the first floor, and that meant oysters. I'm pretty sure they go to their own special stomach when you eat them--I mean, who gets filled up on oysters?--so we figured sharing what they call a Captain Sebastian, 6 raw, 6 broiled, each with a special topping, would be a way to get the evening going and celebrate where we were, blocks away from a bivalve-full bay. Of course there was more beer--I got to have that Redwood Curtain Imperial Golden Ale I skipped there (good choice!) and Chryss had a Six Rivers IPA, which was solid. But the oysters were much more than that, from the ones just mignonette-ed out to one dressed with Cypress Grove Humboldt Fog, spinach, and lemon juice. A very chi-chi place.

So for actual dinner, we had to go to Eureka stalwart, that just happened to be around the corner from our digs, Lost Coast Brewery. It's more, well, Eureka, if quirky; look out for that giant spider that lowers when you walk in the door! 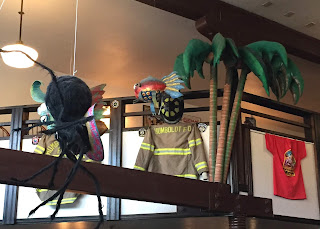 Did you know they're one of the older microbreweries, and started by a woman? All very cool. So while many places have beat them at what's latest, greatest, hippest, hoppiest, they still aim to please beer-loving folk. And their new-ish Revenant IPA matches any standard West Coast hop bomb, rich with the classics, Simcoe and Citra. Plus you pay $4.75 for a pint. As for food, it's not gourmet in the slightest. I'm pretty sure my giganto portion of Chipotle Shrimp Macaroni (that name leaves out there's bacon in there) was as irresistible as it was unhealthy, but that didn't stop me from eating all the equally addictive cheesy garlic bread that came with it too. Chryss, insisting she wasn't just trying to make me feel guilty, had one of their veggie burgers.

After that, there was Rose's Billiards with no one but us there. For you can't have a vacation until you shoot pool. Family rule. (Yeah, we shoot pool like we run, er, jog, but we still enjoy it.) There may have been more beer....