Tripping with George & Chryss--Victory Was Ours (Eureka, Healdsburg, Berkeley) 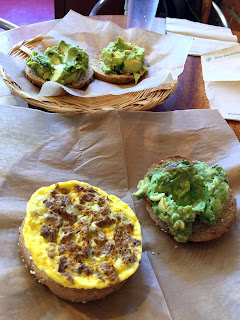 One of the great bonuses of completing a long run you've built up to for a long time is you get to take a few days off from the training regimen, and that means you can wake up and just go have breakfast. So that's what we did Monday morning, finding Los Bagels not far from our stay in Old Town. Suckers, as we are, for the Day of the Dead look, it was hard not to find the place charming. Very good coffee, whole wheat bagels (a bit too healthy for me, but I'm an East Coaster at heart), and that avocado smear was green goodness. The chorizo egg mix wasn't quite as good--again, maybe that chorizo wants to save us all from too much piggy fat, but that just meant it was a bit dry. Stick with the avocado. 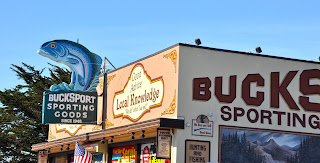 Lovely-leaping signage nobody could get away with in Santa Barbara. It's good to travel. 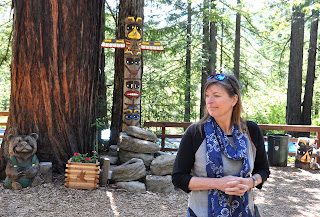 Chryss a bit sad we didn't see the actual Bigfoot at the Legend of Bigfoot roadside crap-atorium ("you'll be thrilled to see all the junk we had shipped from China for you to buy to memorialize your trip to this gorgeous scenery!"). How is it that it's impossible not to stop at a place like this? It's like peering into America's eager-to-sell soul. Remember when we had one? Good times.

Much better times were further down the 101 as we pulled into Healdsburg for a late-ish lunch. I'm sure Sonoma natives see it as a sell out--its square ringed with spots wanting to entrance the tourist dollar--but at least a lot of that is done with some class. Take Shed. Its motto is "gather, share, and learn with us," and they leave out the buy and spend part, but that might just be because that's crass. What they sell is "curated" (as if most stores just let anybody put stuff on the shelves), and you can go on a foraging for Sonoma seaweed trip. It's kind of an upscale Williams Sonoma for people who want to take "make your own shrub" workshops. So that means it's me and all I'm not sure I like about me in a giant modern "barn" space. With food.

So, we set luncheon sail with the cured fish board, small version. If you like sea things, salt, smoke, pickling, you want this board, with all sorts of tones and tastes. Chryss would have been happy with just a bowl full of the trout mousse, piquant with dill, but then mackerel and gravlax and smoked trout and white anchovies and that lovely squid salad at the center. To drink, sweet driver Chryss had a pear shrub (what a tasty way to be alcohol free) and I had a glass of the Windgap Trousseau Gris, simply because practically nobody makes that wine, which is too bad--mysterious and alluring, a hint of smoke but mostly tropical fruit and lemon blossom in a steely package. Great lunch wine. 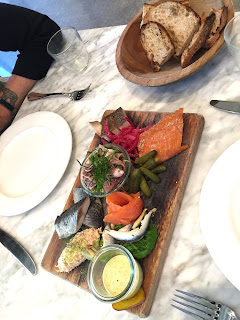 Then as if we didn't have enough, we also ordered the Farro Verde, which also came out on a board and pretty much looked like it was still growing. So how come people have not been feeding us fava leaves before? We love pea shoots, so think of fava leaves as their heartier cousins. There are actual fava beans in there, too, very young so roasted whole--this was a dish (a board?) that completely made you eat in ways you hadn't, but in a nudging not obnoxious way. The fava bean romesco and pine nut ricotta added depth and creaminess and a bit of crunch. What a wonderful way to welcome to spring. 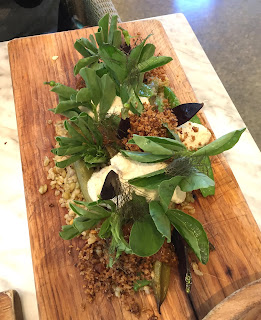 Having had all that for lunch we needed to walk around, so we did, checking out the ritzy pet supply store, passing by tasting rooms, realizing it was so much hotter here than in Eureka. (Oh, I forgot to say we definitely saw the Humboldt fog--there is a perfect gray line off the coast most days, just like in one of our favorite cheeses. Talk about the scenery making one hungry.) So, we walked, and sweated, and then there had to be an ice cream shop. So despite being full, we stopped at Noble Folk Ice Cream & Pie Bar, which made us instantly wonder why there aren't more pie bars. (We'll have to add that to the brewpub+bookstore.) It's very creamy ice cream, and I couldn't resist trying the cornflake-maple flavor, which was the teensiest too sweet for me, but I guess I should have expected that. Should have had pie.

Then, more car, luckily going the opposite way versus the out of SF end of work day traffic, and our next night's rest--the Bancroft Hotel in Berkeley. It's a National Historic Landmark, for good and bad. The building, from 1928, was designed by a guy who had worked with Julia Morgan. It's very California Craftsman, and that's great. It's kept up well, too, and they've gone very green with it--this is Berkeley, after all--from drapes made from recycled soda bottles to EcoTimber hardwood floors. But the rooms are small (as people a century ago didn't need as much space as we do) and our room was on the third floor and there's no elevator. You feel every step of those floors a day after 13.1 miles. But, it's well-priced and directly across from the Berkeley campus. Location, location, look out for the screaming homeless person. 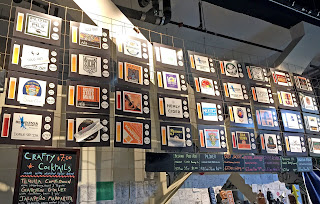 Or duck into a bar, after spending lots of time and not too much lots of money at Moe's (hooray old school bookstores!). That's the board at Raleigh's on Telegraph, and to show you how long it had been since I'd been to Berkeley, I thought I remembered a Raleigh's as a good place to drink interesting beer, but the place I knew burned down and took 6 years to get rebuilt and I missed all of that. So it's much more modern, and, to be honest, there's even more great craft beer, so much so it was hard to leave. So when you don't know the beers--and we didn't, as most of them were northern CA made and therefore don't make it to SB--pick based on what's important to you. So, IPA. So, hazy, because it's a trend we like. So, a Santa Rosa brewery called Henhouse, as we have one. A solid IPA from Sonoma, perhaps the least notable of the four we tried. So, an Oakland brewery called Novel and a beer called Dust Jacket--perfect for readers like us.Perhaps the favorite we tried. Then one from Nevada City, Ol' Republic, called Cosmic Fly By. Another solid, satisfying pour. And then an Alameda Island Island Haze, a perfect name for a New England style IPA. 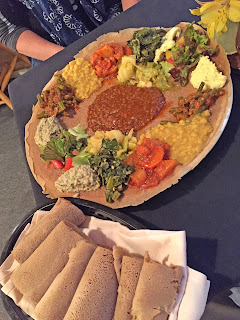 So then we continued, IPA fortified, down Telegraph a bit to an odd international food restaurant mini-mall featuring Peruvian, Korean, Swiss, and our goal, Ethiopian food at FinFine. You see above a double order of the vegetarian combo with more injera than you can eat, especially since you're going to want to gobble up the giant one that has had your food soaking into it for a bit, too. Nothing like having a whole different spice rack than you're used to working to please you (alas, we don't whip up some berbere often at our house, and it's our loss, of course I'm not quite sure where I could get korarima, either). But odd-toned gingers and rue and nigella make for some delightful eating. Even better, they like to shop from local organic farms, so it's farm-to-table exotic. Although the owner did joke, "I have to add some salad, this is America," a line that reverberates in so many ways.

So much food on so much beer means, what else, more walking, so we head over to the Shattuck business area to the west of the Berkeley campus just to check that out. And after a 30 minute walk we're, of course, up for more adventure so visit Jupiter. Not the planet, but the pizza joint/brewpub, as my FOMO still hasn't settled since we wee in Raleigh's. 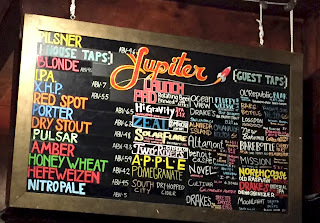 As you can see, the left side of the board is all their own beers, but the guest taps also rock--it was very hard not to go with another Novel, especially when it was called Gravity's Rainbow. But I figured, when in Jupiter, feel heavy, so I had to try one of their experimental beers under the Launch Pad name, High Gravity. It was delicious, with its heart full of Mosaic hops. Chryss, meanwhile, went for a kombucha, which it was probably a good thing she didn't quite know what it was before she ordered it. From Sacramento, Zeal does truly unique flavor combos, and the one Chryss had and loved featured pine, hibiscus, chamomile, lavender, ginger and vanilla. The balance made it all work, given any one of those ingredients added heavy would have made some disaster. Fascinating.

We walked home. We made it up to our third floor room. We dreamed dreams of the full and pleased.
Posted by George at 10:00 PM