Tripping with George & Chryss--A Bit Closer to a Half (Santa Rosa, Laytonville, Eureka) 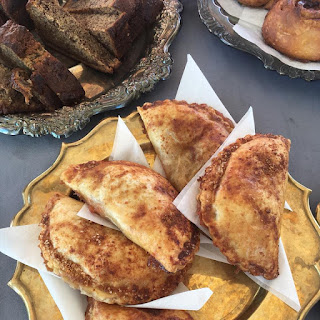 One of the trickiest parts of running a half marathon--assuming you've put yourself through the training, which isn't tricky as much as grueling--is figuring out how to eat the day prior. What complicates that for us is we like to do destination races, so we're often in vacation mode the day prior. And, at least for me (go look at the name of the blog again), vacation mode means celebrating with the food and drink of the region.

Needless to say, you don't want to run 13.1 miles the day after a celebration. So, you have to pick wisely, and I usually don't have any alcohol the day before a run (sometimes the week before a run if I'm feeling particularly noble or in need of any edge possible).

Luckily that doesn't rule out a good latte and some scrumptious baked goods for breakfast. So we took out the Yelp machine and hunted for delicious in Santa Rosa, and managed to find the town's artsy district as a bonus. Somehow we weren't smart enough to take our own photos, so the one above is one of theirs, but it seems fitting to pinch a picture from Criminal Baking Co. & Noshery. It's tiny, but its display case will make you mighty desirous, and fretfully indecisive. You'll want a scone, a muffin, a savory pie, a piece of pie. Then there's actual breakfast sandwiches that other tables seemed perfectly pleased with. I somehow focused on the bacon, apple, cheddar scone, all those flavors an equilateral triangle of balance, and the scone itself manna from heaven. Chryss had a savory pie, chard and goat cheese. Noble sounding can still be delicious you know.

The couple of blocks about Criminal featured more coffee, studios, graffiti/art--all the kinds of things you might not imagine in a town most famous for its longtime artist Charles Schulz. But the vibrancy in this area was more than peanuts, let me tell you. (I'll show myself the door.)

Or, we showed ourselves the car and drove north. Walked about a bit in Hopland, and were distressed to see the old Mendocino Brewing Company spot empty and for rent, plus, of course, I instantly wanted to open a brewpub. 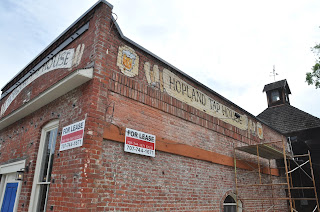 Kept heading up the 101 to our destiny with doom, I mean the race the next day. But we got hungry, of course, so ended up at Big Chief in Laytonville. If you think you're pulling in at a laundromat, you've found the place. Of all things, this spot, which seems from the outside to be a typical greasy spoon roadside diner, serves Cajun food (if Yelp can be trusted--hey, no snickering--the owner is from Louisiana). So we ordered a shrimp po'boy and a mushroom po'boy and each had half. Tasty, if not terrific, but such a surprising find. And I'm not going to talk about their self-billed Draft Punk taps--we're talking beers I haven't seen in Santa Barbara (like stuff from Bagby in San Diego!). Cause I wasn't drinking. Running long distances hurts. 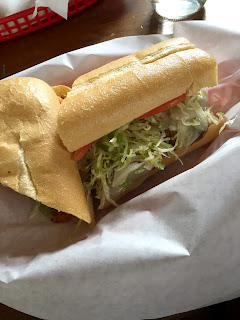 The Avenue of the Giants is the term for the 31-mile portion of the old 101 that snakes alongside the new, multi-lane 101, because logging trucks! It's about an hour south of Eureka, where we chose to stay for Saturday and Sunday, since not much is in-between the two and we didn't have enough time to build a treehouse. Yeah, there's camping, but me and camping are a long story (or maybe a short story: I came from an indoor family), and it's better to wake up in a bed and then go run 13.1 miles, than wake up on the ground and try to do a long run thinking there's still a rock lodged in your erector spinae (that's what the kids are calling back muscles these days).

We stopped in to grab our numbers at the race packet-pickup and to figure out exactly where we had to be Sunday morning. Turns out even the felled redwood by the visitors' center knew we were coming: 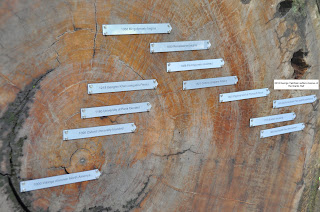 And if you were wondering, "up" is "way" in this neck of the woods: 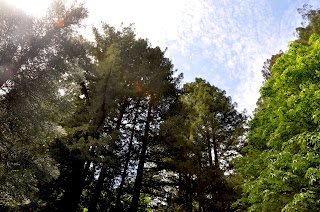 But the good news is we knew it wasn't going to be too hot running the race, since the sun generally can't quite makes its way to you. OK, enough wise-cracking, the redwoods are the kind of place where words don't suffice, photos don't suffice, even your memory assumes it's failing, for it assumes what you want to think you saw can't be that sublime.

We continued on to Eureka and checked in to our AirBnB, right in the historic area in a historic building...that meant we had to walk up to our third floor room. We're talking rooms with 12 foot ceilings, btw, so a floor up is a hike. So much good last day training! And then we got to be so happy during the race, not having to hoist our suitcases too. It turns out it's some special art on the town kind of night (every town does these now, don't they?), so we wander a bit for that, and Eureka kind of rhymes with quirky for a reason--there's a nifty novelty store (I was a 70s mall child and miss Spencer's), vintage clothing stores for when women were half Chryss's size (really, I mean, women weren't 5'10.5" once upon a time), quaint people tabling for Delaine Eastin for Governor, and the cool Eureka Books, which has a huge display of Amy Stewart titles because she and her husband own the place. (So that brewpub we own will have to be a bookstore too.)

For dinner we chose Oberon Grill as it was near, cute, and offered us something relatively simple and direct, so we both ordered the same thing (we never do this, that's how weird the night before a race is). What you see is a pleasantly grilled filet of steelhead (it's Humboldt County, seemed like a good local call), lapped in a chipotle sauce with a bit of zip but more smokiness (again, anything too spicy will hurt you running morning, no pun intended), and some spinach and mashed potatoes for the traditional carb packing part of a meal. 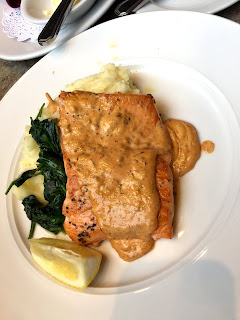 No wine, no beer, no cocktail. Their bar was pretty though.