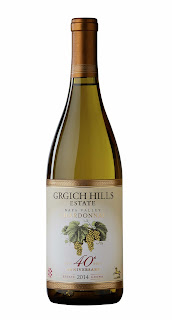 Think of this as delicious history in a bottle: while famed Napa pioneer Mike Grgich started his namesake winery in 1977 — hence this 40th anniversary chardonnay released this year — he also was the winemaker at Chateau Montelena when it won for its chardonnay at the infamous Judgment of Paris tasting that shocked the wine world in 1976 and established California’s reputation.

Want to read the rest then do so at the Independent's site.
Posted by George at 7:00 PM

Email ThisBlogThis!Share to TwitterShare to FacebookShare to Pinterest
Labels: a start and a nudge, chardonnay, Grgich Hills, Independent, Sip This, wine