Belly Up to Barbareno's BBQ 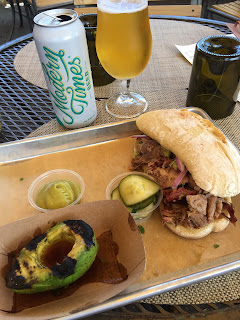 Your nose, if it's a oak smoke loving schnoz, will no doubt lead you down De La Vina on Thursdays and Fridays around lunch time. That's because Barbareño has just started serving up CA BBQ, but it's telling on their menu they don't abbreviate the words. That's because there's never a sense of a shortcut here, and they aren't going to do that for a casual lunch service that stars one of their popular-from-day-one proteins, red oak smoked tri-tip, here in a sandwich slathered with their bright and flavor-popping pico de gallo. (You can order meats/the veggies by weight, if you want to skip the bread, btw--nice move.)

So it works like this: you go and order at the door, then grab a table on their patio lovelier than it has a right to be smack up against De La Vina. You take in more of the good grill smell, and if you ordered a drink, from iced tea to beer, you'll sip a bit anticipating. (I highly recommend the poorly named but deliciously crafted Ice from Modern Times--those San Diegans make magic with everything they brew, including this pilsner that's just hoppy enough but not too. And it only clocks in at 4.8%.)

You can get that tri-tip or a smoked chicken or grilled veggies with a smoked harissa romesco I'm sorry I didn't try today. (Ah, a reason to go again.) (Wait, I didn't need one.) Or you can get the pulled pork you see above, spiced with a cumin rub, laced with bigger than you think they'd be but it works pickled tomatillos. That's a ciabatta roll that's hefty enough to hold all its contents, and that has avocado BBQ sauce keeping it moist and ridiculously flavorful--GM Jesse Gaddy said it took some tries, but in their never-ending quest to bring the avocado, they had to do it. You will get a little cup extra of the sauce and eat some of it on your fork all by itself, hoping to puzzle out its combo of tasty goodness (of course avo so that good fat and creaminess, but then smoke, too, but citrus, but just the haunt of it...). The pork is ridiculously good, with some crispy bits but mostly meltingly tender, and then occasional a bit of pork fat, for that different texture thing. Plus, fat is yummy, let's face it, as long as there's not too much.

For sides you can get their evening menu pinquito beans (and if you haven't had them why not?), a ranch slaw featuring fennel (what shouldn't?), a mustard potato salad, grilled sourdough--their in-house usual--with garlic butter, or a grilled avocado, the hole where its pit sat awash in some of that garlic butter, perhaps.

Your only regret will be the only serve lunch on Thursdays and Fridays.