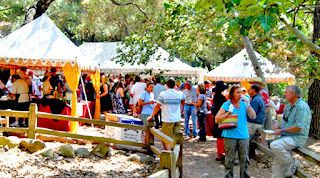 That edition is happening this Saturday under the oaks behind the Museum. So it seemed appropriate to give a quick course in eight reasons you need to go if you care about southern California wine, local food, and your own satisfaction.

1) It was first. Check out that name. You don't get that by jumping in late to the "oh, Santa Barbara wines are cool" game. They've been doing this since 1983 (they missed a couple years)--that's 21 B.S. (Before Sideways). The Museum deserves huge props for supporting the local industry in its youth.

2) Because they were first, they've earned the respect and affection of the founding winemakers of the region. So not only will you get to taste Alma Rosa and Au Bon Climat and Brander and Fiddlehead and Ken Brown and Longoria and Lumen and Qupe, the odds are pretty good the person pouring that wine will be Richard Sanford or Jim Clendenen or Fred Brander or Kathy Joseph or Ken Brown or Richard Longoria or Lane Tanner or Bob Lindquist. You learn stuff here, just by being near. It's not just some well-meaning but unknowing volunteer telling you, "Yes, the chardonnay is a white!"

3) Oaks. They're really fun to stand under. They keep you cool. And there's a creek bed. Rumor has it, there was even water in it this past winter. (That is, there's no more beautiful setting for a wine event.)

4) Food is important at wine festivals, if for nothing else than to give you ballast. But it's way better than that at SBW+FF. A few years back they even had Michael Hutchings do cooking classes--now he just feeds you directly. But he's only one star, and the festival also knows how to keep track of what's latest and greatest. Highlights include Barbareño, Bob's Well Bread, Pico, Loquita, and the just opened and highly lauded Bear and Star. It's the kind of event where the DD's (who, if they pre-register are free entrants with a paying guest) get to have almost as good a time as the tipplers.

5) This year there will be booze. Santa Barbara's own Ian Cutler will serving up tastes of his deliciously distilled wares.

6) It's run, with a keen sense of everything anyone might want or need, by event consigliere (that might not be her official title) Meridith Moore. There's no wiser, more gracious host, and the museum is very lucky to have her.

7) Just as the food has kept up with what's happening, so have the invited wineries. So it's not just a respect for the long-time players, it's the folks with a strong if not as long track record, like Larry Schaffer at tercero (he will have homemade bread for you too, no doubt, the man knows his yeast) and Tablas Creek from Paso bringing its stable of brilliant Rhone wines (have their rosé, you will be hot, it will be refreshing), and Larner Wines (did you hear they've finally got permission to have a tasting room by appointment!). And then there are newer, at least when it comes to their own wines, folks like Dave Potter and the brilliance he makes as Potek (here's hoping he's pouring his Kimsey Syrah), and Graham Tatomer, making Riesling and Gruner safe for southern CA. (Correction, change safe to delicious.)

8) One hundred percent of the net proceeds from the Wine Festival supports nature and science education for adults and children. So you have a great time and are doing something good. If there's ever a time we need more education and more science, it's now.
Posted by George at 10:10 PM