You Need a Visit to Loquita 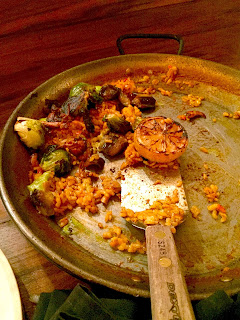 Smoke. A scent, a flavor, a memory. Something calling us home to a home we never had (I'm assuming I have no cave-dwelling readers). Or, perhaps we've evolved into homo ignis in a hope to return to the fire (plus of late it's been really hard to buy we've earned the sapiens, but that's a different kettle of Trump).

Take that first paragraph as a slow burn to the topic of this post--Loquita, the latest restaurant opened by Acme Hospitality, who have already graced Santa Barbara with the likes of The Lark, Les Marchands, Lucky Penny, and Helena Avenue Bakery (surely sad its name also doesn't begin with a "L"). When you walk in you can't not sense the wood-fire that's the heart of the open kitchen, waiting to make your dinner smokily luscious. And we're not talking a pizza oven, but an out-and-out grill, early in the evening's service crammed with halved lemons, their citrus crisping.

For Loquita, taking its cuisine cues from Spain, does things simply, but that word can seem so diminishing. Here it means get to delicious with the fewest amount of flourishes. Much of that is topnotch ingredients--Spain was farm-to-table before we invented hyphens. But it's also not being afraid of flavor; acids are everywhere, bright and beautiful, coming from those grilled lemons, from sherry vinegar, from the salted, preserved sea (ah, white anchovy, bait turned delicacy).

As an eating strategy you're meant to share, so pick several pintxos with your cocktails--and do have cocktails, from the currently in fashion Spanish G&Ts, which means craft gin and celery bitters and peppercorns in one option, say, to the mixed drinks, like one rooted in mezcal (more smoke) and amaro--and then a bunch of tapas, and close with a shared paella. Bring lots of friends, as it's supposed to be social, shared food a currency, a language, a love we can then all have on our tongues. (I don't mean to wax poetic, but those cocktails....)

Don't skip something like a salad, especially as it goes by Hinojo, and that means fennel. Someone plays a mean mandolin in the kitchen, it's shaved so fine, as is apple, so much crunch and vivid flavor. But there's more, if only a bit--radicchio for yet more bite, this shading to pepper. Then some walnuts, not so much candied as once neighbors to something candied--it's hard to believe they could be sweetened so delicately. The dressing is a quick coat of honey mustard vin, all written very lower case, and think how hard that is as you remember every other heavy-handed honey mustard dressing of your life. The last perfect touch, Manchego, Spain's national cheese (if it isn't officially I'm naming it that), but in little blocks, distinctly declaring their fatty cheesiness amidst the rest of the pure, insisting, "Sure, this is a salad, that's healthy, but c'mon! you're out to dinner!"

And please, for the sake of all that's holy and swims in the sea, don't skip Pescado. This is one of the best fish dishes I've had in years, and if you thought the salad was simple.... Mediterranean sea bream, aka dorade, is the star, a perfect filet with crispy skin and all of the ocean in each tasty bite. But under that there are also excellently executed gigante beans, skins solid, interiors creamy. Atop some frisee,  not just the visual curlicue the plate needs but again that pepper and zip, the latter echoed in the lemon no doubt squeezed from more of those wood-roasted fruit. Get a bit of everything in one bite and you might be in Barcelona. (Oh, I haven't meant to ignore the great remodel of the space Loquita's in--I said it was an Acme project, so you know it's going to be designed elegantly. Try to get a seat at the "chef's table" bar right along the kitchen, so you can watch everything else you won't be able to eat get prepared, too.)

I don't mean to pooh-pooh the paella, which was lovely, especially the lowest rice level done to delicious diamonds (ok, eating diamonds would hurt, but you know what I mean). But Pescado! I dream of Pescado! Even with the paella, the vegetarian paella--that's how tough we were on the kitchen, not letting them easily please us with meat or mariscos--a roasted delight, thanks to the wild mushrooms, the Brussel sprouts (what better use of them than on something blasted by an oven for heat), the eggplant melting into unctuous ghosts of itself--I still want to swim with Pescado.

And that didn't stop us from churros, because what do you take us for, penitents?
Posted by George at 9:49 PM